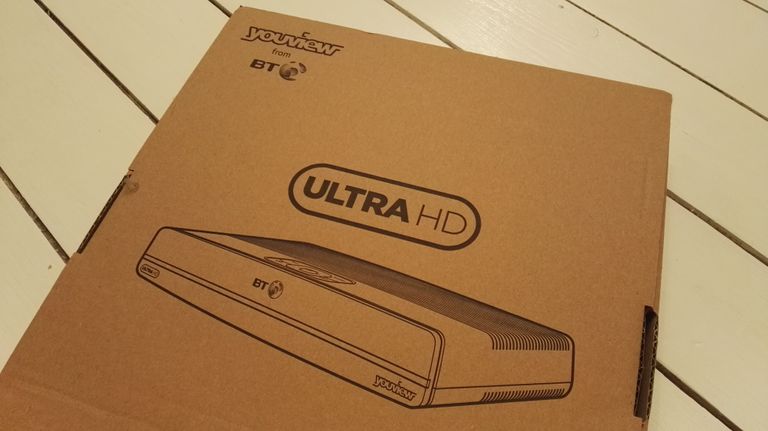 Although Sky is rumoured to be announcing a 4K Ultra HD version of its Sky HD box, BT is the only UK provider who has so far released a box alongside Ultra HD content.

In BT’s case, the content is the BT Sport Ultra HD channel that provides a live Saturday lunchtime Ultra HD game most weekends of the Premier League season.

We’ve been trying out the Humax-manufactured BT Ultra HD box for several weeks now The box itself is the same chassis as BT’s previous second-generation BT TV box, which is essentially YouView with a BT download and rent movie and TV store tacked on.

YouView itself is kind of a Freeview HD on steroids; searching for programmes finds relevant results on catch up services as well as upcoming stuff on live TV. You can also browse backwards for the last week in the Planner and just play what you want.

You also have the ability to stream various premium channels (BT Sport included) if you have the right package.

Unlike previous BT boxes, the new unit comes with 1TB of storage.

Because BT Sport comes through your BT broadband connection, you need to have the Infinity version of the service providing you at least 20Mbps.  The box also needs to be wired to the router. BT provides a 10m Ethernet cable for this in the box. Powerline networking is not recommended, although there’s no hard and fast rule why you can’t providing you can get a fast network speed.

So what’s the Ultra HD service like to use? Well, the first thing is that there’s basically no setup once you’ve plugged in the box and performed some basic setup steps.

The hardest thing is actually finding the BT Sport Ultra HD channel; now that BT Sport has the Champions League there’s also a BT Sport Europe channel as well as Eurosport, BT ESPN and BT Sport 1 and 2 to sift through.

But we know what you want to know; does it LOOK any better compared to Full HD? Well the simple fact is that it does. We’ve seen 8K in action before and it’s the small details that are picked out so well. It’s no different with 4K; a wide shot of the players lined up revealed a lot of detail on their face. It’s also easier to see shirt numbers, faces in the crowd and faces in the dugout.

What Ultra HD didn’t make a difference to was our overall enjoyment of the game. While it looks spectacular, it must be said that you don’t ‘feel’ closer to the action than you do with Full HD. We didn’t say the same about the leap from SD to HD; that was like night and day.

One of our favourite things was the speed of the new box, which zipped along compared to my old original Humax YouView box.  And thanks to the YouView app, you can also remote record providing you pair your device with the box first.

It remains to be seen if BT can sign enough paying customers up to this premium offering, but as