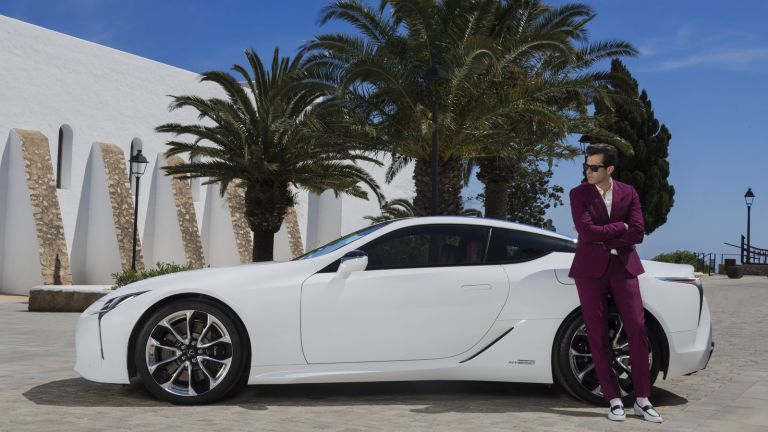 The Lexus LC 500 is a perfect combination of design, innovation and, in the case of the 5 litre V8 model, brute force. But, this super cool luxury coupe isn’t loud and obnoxious, it’s subtle and refined. Similarly, a hybrid version, the LC 500h comes with the same price tag and is just as exciting to drive. Those looks though turn heads everywhere you go. And, get it out on some decent winding roads and you’ll see this elegant coupe turn into an altogether different beast. Which is exactly what T3 did in an extravagant Lexus operation dubbed ‘experience amazing’.

After being ferried to a remote island village each driver enjoyed an immersive experience that allowed them to drive a white hybrid version of the LC 500 through the hills. The night before we’d also been able to give that muscular 5 litre V8 version with its 10-speed transmission a quick flit around the roads near Ibiza town. It was short but sweet. The next day, in a logistical masterstroke, the Lexus team managed to create a route that was almost exclusively given over to the driver, but with added thrills and spills thrown in for good measure.

This was not a conventional drive in any way. A crowd of actors dressed in full wedding regalia kicked things off, before leading each journalist to the white LC 500h that came fully loaded, not only with all the toys but with two interior cameras to film progress along the route. Over the next few kilometres there were all sorts of diversions including a pair of dancers on a pedestrian crossing and a closed off road full of workers plus a stern-faced policeman.

Flagging each driver down, the officer asked to see papers, which turned out to be a fake licence stuffed in the door pocket. Meanwhile, the labourers turned bollards, tools and buckets into musical instruments and danced around the car. Following the twist and turns down to the sea, complete with an amazing shark fin rock sticking up out of the ocean, drivers were finally halted at a beachside café where they had to get out and join an over-the-top dance troupe for a dazzling finale in front of the cameras. Subtle it wasn’t.

As for the car itself; getting into the luxury coupe, as the LC bit suggests, offers up all sorts of little surprises. The steering wheel height can be adjusted electronically via a switch on the left of the column. The speedo is very cool too, automatically switching displays depending on what drive mode you’ve selected via a knob on the side of the binnacle. And those seats are a real treat; comfy but with lots of support, making the car ideal for long runs and perfect for holding you in place during tight countryside corners.

There are lots of neat design flourishes around the LC 500 too, with the Lexus logo being repeated on trim panels as well as in the headlight clusters. The body line up the bonnet continues into the cabin, along the top of the dash and down along the door panels, while the hand-stitched leather feels suitably sumptuous and comes in an array of colour options. It’s a look that producer and DJ Mark Ronson likes a lot by the sound of it. Lexus commissioned him to produce six mix tracks for the soundtrack to the ‘experience amazing’ event.

“I love the car,” he says of the LC 500. “You can tell how important this launch is to Lexus and they had a really interesting idea about what they wanted to do with it. For me, just going to the studio and sitting at the piano doesn’t always bear fruit. I like the idea of someone saying to me ‘Hey, can you write like six original pieces of music that fit the Lexus LC and people are going to make their own soundtrack’. I respond well to that sort of thing. It’s kind of like being presented with a mission. Like when I met Amy Winehouse and she played me a bunch of 60s girl groups and said she wanted to make something that sounded like that. I had never really heard that music that well and certainly never made anything like it, but I love that whole idea of just trying it out.”

As is always the case with Lexus, the company is keen to underline how much of a lifestyle decision owning one of their cars is. In the case of the LC 500 and Ibiza it was a world full of good food, stunning surroundings, full body massages and Japanese tea ceremonies. Late afternoon and evening was spent with the LC 500 parked at the front of a lavish villa up in the hills. Overlooking the old town, the inside featured other Lexus creative highpoints, including the Skyjet from forthcoming movie Valerian and old favourite, the Lexus hoverboard.

People who had done the drive earlier were able to sit in on the edit of their video and, using Novation Launchpad for iOS, create and mix the soundtrack. Launchpad has been a huge success, with 7 million downloads and counting. It’s also incredibly addictive, in a good way, allowing anyone to become a recording artist. Well, with a little bit of help from Mr. Ronson that is. Meanwhile, down in the basement, a bunch of creatives and a collection of Macs enabled videos of the drive to be tweaked, toned and made ready for distribution the following morning.

“The Launchpad thing is great,” adds Ronson. “Obviously, I came up in the old school, mixing and matching tempos with belt-drive turntables and so you had to do everything by ear. Now the technology is there that allows you to do everything instantly and in real time. It’s cool and fun to watch people play with it. I guess what I did was that Lexus asked me to make six individual themes and then make them all in the same key and all the same tempo, so that you could have all these buttons to control at will. A baseline from one theme, drums from another…”

The plan worked. Somehow all of us became minor-league musos. This was certainly no ordinary launch, but then the LC 500 is no ordinary car either…