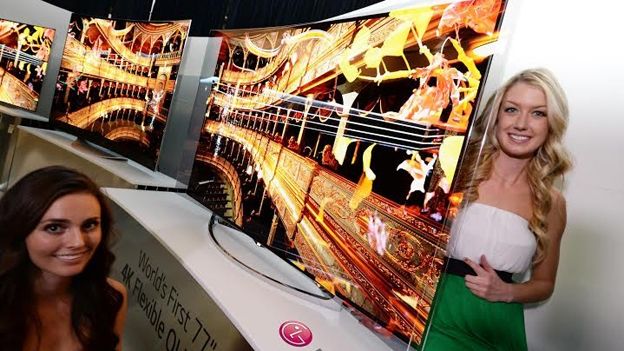 LG has cranked up the competition with fellow South Korean TV maker and bitter rival Samsung at CES with the unveiling of a huge flexible television.

The massive 77-inch flexible OLED panel is on display at this year's Consumer Electronics Show. And when LG say flexible, it doesn't mean curved. The bend in the screen can be controlled by the user.

However, despite one-upping rival Samsung, it is playing second fiddle to the company's range of WebOS TVs.

The television is a combination of two major television trends from last year, bigger and brighter OLED screens and 4K resolutions.

“LG's flexible OLED TV is a product that has to be seen to be believed, because it defies description,” commented LG president and chief executive officer Hyun-Hwoi Ha.

“What curved is to flat, flexible is to curved. LG continues to lead the evolution of televisions into the next generation.”

According to LG, the reason for allowing the user to control the bend isn't about showing off. Rather, it is about helping people to get the best viewing experience no matter where they are sat in their living room.

Samsung is showing off a larger, bendable TV at CES. However, it doesn't feature the same visual fidelity as LG's due to it not being an OLED screen.

There's no word on whether or not the TV will make it to the UK, or what it's price will be.