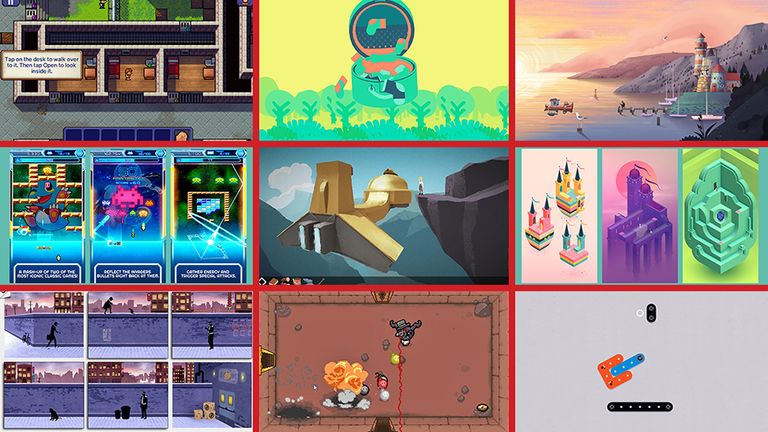 You don't need to buy a Nintendo Switch to enjoy some mobile gaming this summer - you've got a very capable portable gaming machine already in your pocket. Whether you're rocking an iOS or Android smartphone, you've got a ton of gaming titles to try.

In fact there's so much choice that narrowing down the selection can be tricky, so we've put together a list of our favourite mobile games to arrive so far in 2017. From peaceful puzzlers to action-packed adventure games, you should be able to find something to your tastes.

1. Milkmaid Of The Milky Way

If you've got a hankering for the point-and-click adventures of gaming yesteryear then Milkmaid Of The Milky Way is a real treat. Okay, the graphics aren't set at as high a resolution as many other mobile games of 2017, but the scenes are beautifully drawn, and the story - based around cows and spaceships - is intriguing. All of the dialogue in the game is written in rhyme as well, which is another nice touch that adds to the game's appeal, and the pixelated interface works well on smartphone screens of all sizes.

Beholder is one of the more interesting setups we've seen in a mobile game in 2017, and it's rounded off with some atmospheric visuals and a suitably sinister soundtrack. Your job is to spy on citizens for the state, but it's up to you whether you play by the rules or try and lend a hand to the people you're watching over - if you dare. You'll feel like you're in your very own dystopian spy movie, and the events of the game play out differently depending on the choices you make, so there's scope for playing through Beholder several times.

Framed 2 is the follow-up to the 2014 original but is actually set a as a prequel, so figure that one out. Whatever the chronology, the same clever concept is given a fresh twist: as in the first Framed, you must rearrange the panels in a comic book so they make sense, advancing the game's plot and testing your puzzle-solving skills to the limit at the same time. It's well designed, executed smartly, and perfect for a few minutes of distraction when you need it - the only disappointment is there's no Android version available yet.

Two classic retro games are mashed together and the results are actually a lot better than you might think - this is a game that's bright, brilliant fun, and addictive, not a bad combination for a mobile title. Whether or not you've played the originals, you can dive right into the alien-blasting action, frantically slinging your spaceship across the screen and trying to collect as many bonuses as possible (don't worry, there is a tutorial that helps you). You'll be wanting to go back again and again to try and smash your high score.

5. The Binding Of Isaac: Rebirth

Admittedly the title's a bit of a mouthful, and the content's quite dark, but in terms of gameplay this randomly generated RPG actioner is a definite winner. Previously available on consoles and desktops, the game has arrived on iOS this year, though as yet there's no word of an Android version. You've got a ton of secrets and surprises to discover as you trot around the map, and while the game mechanics look simple on the surface, it's actually more nuanced than you might think. The price is high, but we think it's just about worth it.

In a lot of ways Vignettes defies description, but we'll give it a go anyway. You get a series of brightly coloured objects and scenes to explore, and as you swipe and tap around you uncover a succession of secrets and hidden features that invariably raise a smile. Some gamers will find it a bit too lightweight for their tastes but we think it's fantastic - perfect if you want your games to give you a chilled out, peaceful feeling rather than turning on the adrenalin. We have to mark the game down for not being available on Android, though.

Old Man's Journey may be brief, but it's dazzling, as you move your way through brilliantly drawn scene after brilliantly drawn scene - we won't go too far into the plot for fear of spoiling it, but the title of the game tells you pretty much all you need to know. It's perhaps more of an interactive storybook than a game, exploring themes and ideas to do with being human that you don't get from most mobile titles, and that's well worth the price of admission. One of those games that's likely to stay with you for a very long time.

Phones and tablets are perfect for slick, simple, physics-based games, and that's exactly the category that Zip Zap falls into. Your challenge is to arrange the objects in each level into positions that make sense and allow the level to be completed, and there's just enough variety to keep your brain ticking over (and to keep you coming back to the game). You get more than 100 levels for your money, and the app doesn't include any of those annoying in-app purchases either, so you can keep progressing without any interruptions.

A delightfully fun and engaging prison break game that made its mobile debut this year, The Escapists packs in the perfect blend of humour, intuitiveness and difficulty, making it one of our favourites of 2017 so far. Everything you do in the game, from getting friendly with guards to working out at the gym, is done with the ultimate goal of breaking outside the prison walls, and the level of detail here is impressive as well - you've got six different prisons to break out of, each an interesting and unique world to explore in pixel form.

Monument Valley wowed mobile gamers when it launched in 2014 with its gorgeous-looking graphics, fiendishly designed levels, and thoughtful puzzles, and this year Ustwo Games have released a sequel which is very much more of the same. Again, the challenges are delightfully crafted and drawn on screen as you work your way through a series of isometric levels, and the whole experience is refreshingly calming. An Android version is apparently coming soon, although no launch date has been announced.