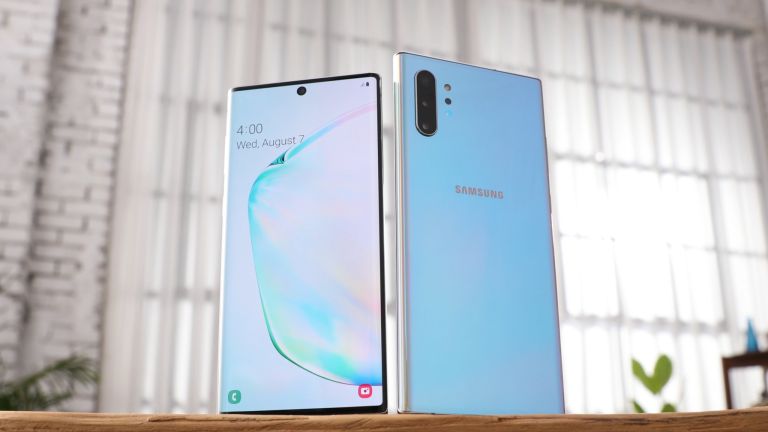 And for the first time since the Galaxy Note Edge, which was launched at IFA alongside the Galaxy Note 4 in September 2014, Samsung has debuted multiple versions of its flagship Note line. To be more precise, there are now three separate variants of the Samsung Galaxy Note 10.

Galaxy Note 10 and Galaxy Note 10+ allow users to choose between two different screen sizes for the first time with the Galaxy Note range, which has traditionally sported some of the biggest displays on any Samsung-designed smartphone.

There are also some smaller differences in the hardware between these two models. Rounding out the range, there is a 5G-enabled variant of the Samsung Galaxy Note 10+. Those who prefer a smaller display are stuck with 4G only.

If you buy direct from the Samsung Online Store, you can get up to £350 off the price of your brand-new Galaxy Note 10, or Galaxy Note 10+ when you trade-in an older handset. To be eligible, you'll need to purchase your new smartphone online before midnight on August 31, 2019.

As you'd expect, £350 only applies to the highest value trade-ins, which include the Galaxy Note 9, and all variants of the Apple iPhone 8 Plus. Samsung reserves the right to downgrade the amount of cash based on the condition of your handset.

In case you missed the Galaxy Unpacked launch event, the Galaxy Note 10 continues everything the flagship smartphone series is known for – expansive high-resolution displays, a feature-packed stylus, cameras galore, and the sport of specs you'd usually only expect to find in the laptop aisle of your local Currys PC World.

Galaxy Note 10 has a 6.3-inch AMOLED display with the same dual-curved sides you’ll find on the Galaxy Note 9 and Galaxy S10 series. Like the latter, this is an Infinity-O design, with the camera embedded in a small O-shaped cut-out in the display in order to thin the bezels and squeeze as much screen real estate as possible in the physical footprint. This design has enabled Samsung to achieve an impressive 93.2% screen-to-body ratio, up from 83.9% on the Note 9.

Meanwhile, Galaxy Note 10+ has a pocket-busting 6.8-inch Infinity-O AMOLED – the biggest ever on a Galaxy Note smartphone – with an even more impressive 94.7% screen-to-body ratio. The displays on the Note 10 and Note 10+ are HDR10+ certified.

Both Note 10 and Note 10+ have centralised the hole-punch for the selfie camera at the top of the display – instead of squirrelling it away in the top right-hand corner, as seen on the Galaxy S10 series, or left-hand corner, like the Galaxy A8s.

Samsung told T3 this relocation was based on customer feedback on the Galaxy S10 range. According to the company, customers were left unimpressed that the selfie camera cut-out pushed the battery, signal and other important system icons, towards the middle of the screen.

Whether Galaxy Note 10 owners will be entirely happy with the new placement, which could be more intrusive when watching videos in a landscape orientation.

Interestingly, the front-facing camera placement isn’t the only thing Samsung has learnt from the Galaxy S10 series. The smartphone manufacturer has also changed the placement of the in-screen ultrasonic fingerprint scanner so that it’s closer to the centre of the display, where your thumb should naturally fall when using the handset.

Galaxy Note 10 and Note 10+ are running the same One UI mobile operating system introduced with the Galaxy S10 series. The Android Pie-based mobile software acknowledges that while we all want massive screens, massive smartphones are annoying to use, especially one-handed.

To solve this, One UI shifts all the elements of the user interface that you’ll actually need to interact with – buttons, toggles, menu items – into the lower-third of the touchscreen where they can be easily reached.

Think of it like the Reachability feature Apple introduced a few years back, which temporarily drops the entire screen into the lower-half of the display, but applied across an entire user interface. Even swiping on the notification shade drops the quick action toggles far enough down the display that you won’t need to perform thumb-gymnastics to hit the right icon.

The comically-large menu titles at the top of the display look a little odd to start with, but we’ve been very impressed with One UI so far. Given the size of the screens on the Note 10 series, it’s likely to prove invaluable to use one-handed while juggling a coffee cup on the way to work.

As the flagship Galaxy Note and Galaxy S lines have drifted closer – with the latter benefiting from the same large screen popularised by the Note, the differentiating feature between the two ranges that has remained is the S Pen.

The small stylus, which is housed inside the case of the smartphone, can be used to scrawl handwritten notes (hence the name), annotate webpages, sign PDFs, and remotely control the camera shutter to take photos at a distance without relying on the timer, and moving between slides in PowerPoint presentations.

With the Note 10, Samsung has added six-axis sensors into the S Pen to bring new gestures. For example, holding down the button and flicking upwards with the stylus – like a trainee wizard at Hogwarts – can switch between the front and rear-facing cameras. Dubbed Air Gestures, this new functionality will be open to third-party developers, so Samsung expects to see some interesting applications appear on the app store in the coming months.

While the S Pen included with the Note 9 included the ability to remotely control keynote presentations, the 30-minute battery life meant you had to do some serious trimming to your TED talk to benefit from the new feature.

Thankfully, the new S Pen bundled with the Note 10 has a whopping 10 hour battery life and can recharge from flat in 6 minutes.

When it comes to productivity, Samsung has struck a new partnership with Microsoft that brings a number of benefits to the productivity-focused Note 10 series. For example, both handsets can be plugged into a Windows 10 machine via USB-C and support desktop-like features, including the ability to drag-and-drop files between the two devices. Note 10 can drag Word documents hastily written on their smartphone onto their desktop and polished with a keyboard and mouse.

It’s similar to Samsung DeX, which uses the Android operating system to create a windowed desktop experience with the application installed on the phone. The new Windows 10 version does not replaced DeX, which now supports Windows and macOS via USB-C.

Note 10 and Note 10+ share the same 10MP front-facing camera, but the multi-camera set-up on the rear of each model is slightly different. While both models share the same triple-camera, which combines a 12MP wide-angle shooter with variable aperture that automatically switches between f/1.4 and f/2.4 to capture images in tough lighting conditions, a 16MP ultra-wide with a 123° field of view, and a 12MP telephoto camera.

If that selection sounds familiar, it’s because it’s the same mixture of ultra-wide, telephoto and dual-aperture found on the Galaxy S10 Plus – so you’ll find exactly the same photo options, including the artificial adjustable bokeh blur Live Focus photos.

Where the Note 10+ differs is the new patented DepthVision camera, which includes two separate sensors and is different from the Time Of Flight sensor found on the Galaxy S10 5G. Samsung says the new propriety system should offer better bokeh-style blur behind the subject in photos and videos. It should also offer more accurate results when measuring distances, or placing computer generated objects into the real-world using Augmented Reality (AR) apps.

Thankfully, the lack of DepthVision sensors on the Note 10 doesn’t preclude the smaller smartphone from shooting Live Focus photos and videos. Instead of the new sensors, the Note 10 uses software to replicate the effect. When viewed side-by-side, it’s difficult to tell the difference between the hardware and the software approaches. That is by design – and the only time the Note 10 will suffer from its lack of DepthVision is during AR applications, Samsung says.

Unsurprisingly, most of the new features in the Galaxy Note 10 and Galaxy Note 10+ are geared towards work, but a lovely moment of levity comes with the introduction of the new AR Doodle feature.

This lets you scrawl on faces in the viewfinder, with the hand-drawn crowns, glasses, facial, and presumably, comically-engorged genitals, sticking to the face as it moves. AR Doodle can be used for photos and videos.

Note 10 packs a 3,500mAh battery, while the Note 10+ has a beefier 4,300mAh capacity cell. To ensure both handsets could accommodate the biggest possible battery cells – while also slimming down the chassis, Samsung has ditched the 3.5mm headphone port. In the box, Samsung will throw-in a pair of USB-C wired AKG headphones, but no dongle. Of course, this can be bought separately from the Samsung Store, but the additional purchase could be frustrating for people with older 3.5mm headphones they’re reticent to ditch for a new phone.

Elsewhere, both Note 10 and Note 10+ include sound tuned by AKG, Wireless PowerShare – that allows you to charge Galaxy Buds or any other Qi-compatible gadget by placing it on the back of the handset, IP68 water and dust resistance, support Wi-Fi 6, 25W fast wired charging, and 15W fast wireless with supported charging pads.

Galaxy Note 10+ also benefits from all-new super-speedy 45W wired charging, which Samsung claims can refill your smartphone with enough battery life to last an entire day – and well into the evening, with just 30 minutes plugged into the wall plug. Interestingly, Samsung doesn’t recommend using this 45W charger, which is sold separately, every single day if you want to maximise the lifespan of your battery cell.

T3 will have an in-depth review of the Galaxy Note 10 series soon, so stay tuned.