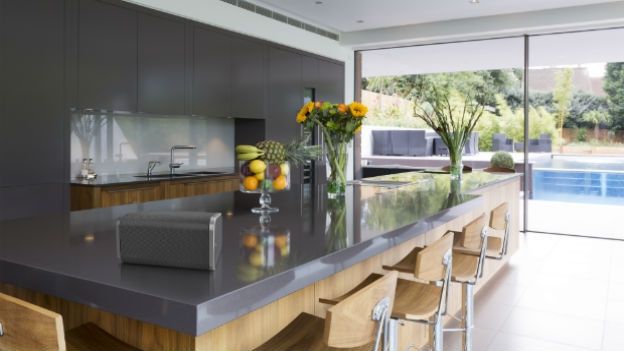 Panasonic has revealed a new wireless multi-room streaming system that will play songs around your house over Wi-Fi.

Going after a market currently ruled by Sonos, Panasonic has detailed the SC-ALL3 and SC-ALL8 speakers at its annual convention - held this year in Amsterdam.

The top-end SC-ALL8 speaker is the daddy of the set and is wall mountable, while the smaller SC-ALL3 has a two-wall design that means it can be stood either vertically or horizontally depending on the layout of your crib.

Using the Panasonic Music Streaming App, playback can be controlled from a smartphone or a tablet (iOS and Android are both supported) and, as with similar systems, internet radio and streaming services like Napster and Spotify are supported.

The SC-ALL8 uses a five-speaker system with dual woofers and tweeters layered with bamboo that, Panasonic says, provides lightness and rigidity for a clearer sound through the mid to high-frequency range.

Wooden construction aside, T3.com got a listen for ourselves at the Panasonic convention and we were suitably impressed with both the volume and the clarity of the sound.

The smaller SC-ALL3 boasts two woofers and two tweeters and is more than capable of producing some serious volume.

Like Sonos' Play series - the Panasonic ALL speakers can either play the same music simultaneously in different rooms or can be tasked to play a different track through each speaker. So, in real terms, you could have Kylie playing in the kitchen while Foster the People rock the living room.

Similarly, there's the option to pick up the SC-ALL1C connector which can attach to your existing Hi-Fi system via analogue or digital connections and make it part of the ALL network.

Unfortunately, Panasonic has yet to reveal any kind of pricing or UK release date for the speaker system - but we're excited by the potential we've seen here and will update you as soon as we hear anything.