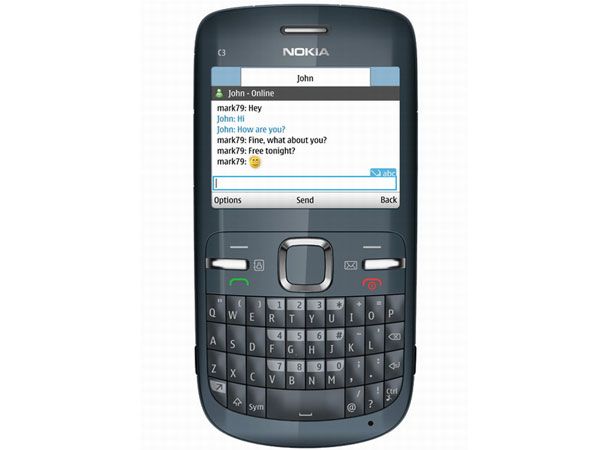 Following the unveiling of the Nokia C1 and Nokia C2 last week, Nokia has now announced the next logical step in the series; yep you guessed it, the Nokia C3.

Clearly aimed at the ever-expanding cult of compulsive social networkers, the Nokia C3 will sport a full QWERTY keypad and access to Facebook and Twitter direct from the home screen when it becomes available on the Nokia UK online shopfrom Friday June 18th.

Email management, and IM chat are other areas in which the Nokia C3 focuses its limited powers with one-click access to email and chat via Nokia messaging and dedicated home screen widgets.

With just a two-megapixel camera, image and video quality isn't going to be of the highest order, however, with GPRS and Wi-Fi connectivity, user's snaps could be adorning their Facebook pages in a matter of moments.

Following its £109, SIM-free release on the Nokia UK online store, the Nokia C3, which comes in three colours, hot pink, slate grey and golden white, will be released exclusively on Vodafone for one month on Monday June 22nd before O2, The Carphone Warehouse and Phone4U pick it up in August.

Managing Director of Nokia UK, Mark Loughran, describing the new handset said: “The Nokia C3 brings style and connectivity at an affordable price. Whether it's via email, the web, social networks or IM, you are always connected, in a way that suits you.”