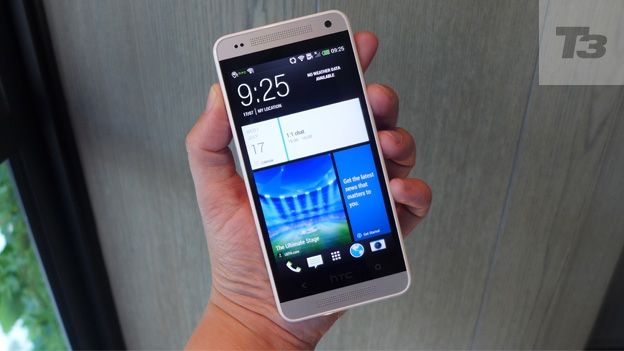 The HTC One Mini may have a few things in common with its Galaxy S4-rival of a sibling, the HTC One. Where it differs though is the more portable 4.3-inch HD display

The HTC One Mini has just been unveiled sporting a smaller 4.3-inch 720p HD display along with a 1.4GHz dual-core processor and 1GB of RAM. HTC hopes the Mini will be able to reclaim much of their lost mid-range market to the Xperia SP and the Samsung Galaxy S4 Mini.

Sharing the same design elements as the HTC One the Mini actually has all the same features including BoomSound dual-stereo speakers and HTC's Ultrapixel camera which was first unveiled on the HTC One.

Dispite it's wallet-friendly pricetag HTC have still gone for the premium aluminium design reminiscent of the iPhone 5, the front then also features the same layout however the screen appears to be somewhat narrower.

There's good news for fans of the recent news that EE was doubling its 4G speeds as the HTC One Mini is indeed a 4G-compatible handset.

EE have also just confirmed that they will be stocking the HTC One Mini when it lands in the UK later this year.

Interestingly the company has decided to remove the NFC functionality from the HTC One Mini, but you do still get Bluetooth 4.0, WiFi and HTC Connect along with the standard 3.5mm headphone jack.

BlinkFeed also makes an appearance along with the new-look HTC Sense, the latest user-interface that HTC has skinned on top of Google's Android operating system.

Storage is taken care of via 16GB however for those worrying that might not be enough Dropbox, SkyDrive and other cloud storage solutions are all available via Google Play.

For those worrying about the lower specs check out our HTC One Mini review: Hands-on to find out whether this is a worthy sibling to the HTC One.

More about HTC One Mini