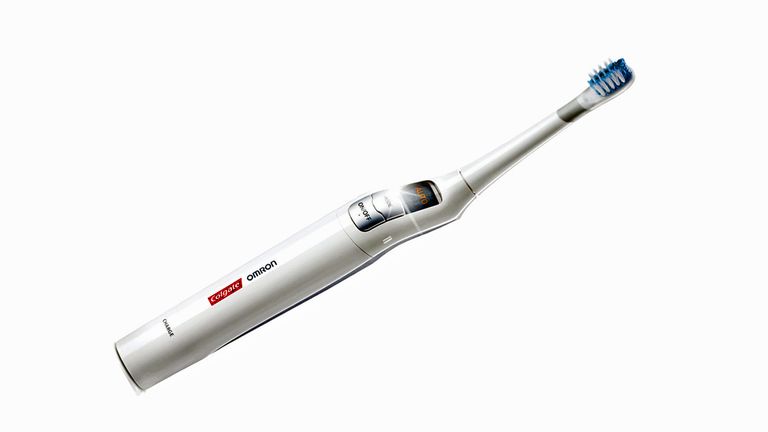 Toothpaste brand Colgate's ProClinical A1500 ("Powered by Omron"!) is an interesting example of how online retailers such as Amazon can help discount devices to the point where they become more desirable.

When first launched, this electric toothbrush cost £200. At that price it was extremely hard to recommend. However, its current price of £60-ish makes it a fairly attractive purchase.

Whereas the Philips Sonicare range vibrates noticeably but rather pleasingly, and Emmi Dental's brushesdo so in a way so fast and gentle, you barely notice it's cleaning, this takes a rather different tack.

In short, the ProClinical A1500 feels rather like a runaway power tool, and makes a noise that is unpleasantly reminiscent of the dentist's. That's regardless of whether you have it on 'Auto' or 'Optimum' mode, whilst 'Deep Clean' takes it up a pitch to vaguely terrifying effect.

So it sure as hell sounds like its cleaning your teeth, and in our experience it gives very good results. The concern would have to be that it's too abrasive, because it both sounds and feels far more abrasive than its electric toothbrush rivals.

That's despite the fact that the Colgate ProClinical A1500 changes speed dependent on the way you are holding it. The idea being that it runs faster when run along the top of your teeth, and slower when horizontal against your gum line. It's a nice bit of engineering, but we really debate the usefulness of this USP.

In Optimum mode, the brush runs at a single (loud and scary) speed, and we preferred that, to be honest.

This was around £200 when it first appeared, and at that price we'd say forget it. However, thanks to the miracle of capitalism it's now easily available for less than a third of that price.

Brushes are around £18 for a pack of four, which as usual for electric brushes, is not exactly cheap, but should last nine months or so.

Like Philips' Sonicare DiamondClean, the battery generally seems to last about a week between charges. As with most higher-end electric toothbrushes we've tried, recharging is less than speedy, taking an entire day to get fully back to capacity.

If you can ignore the alarming noise it produces, the ProClinical A1500 is a generally well designed thing.

Two buttons turn it on and off and take you to the mode you require, the screen showing said mode actually lights up, and the small brush head is perfect for cleaning teeth, the gum line and blasting debris from the interdental areas.

It's easy to hold and manipulate, packs away small for travelling, and looks quite stylish, as toothbrushes go, although not a patch on Philips work of dental art.

Our reservations about the Colgate brush's design are twofold. Firstly, the signal that you've completed 30 seconds of brushing and should now move onto the next quarter of your mouth is much too subtle. Secondly, the multi-speed cleaning action is confusing, and of questionable usefulness.

If you're looking for a cheap but well made electric brush, the Colgate ProClinical A1500 is a decent choice. We wouildn't recommend it if you have sensitive teeth/gums, or indeed sensitive hearing, but it cleans as thoroughly as the racket it makes would suggest.

The main reason we recommend it is the fact that its price has come down by such a large amount since its launch five years ago. Its original RRP was ridiculous.

However, if you're not on a budget, we'd always recommend a top-end Philips or Oral B electric toothbrush over this.