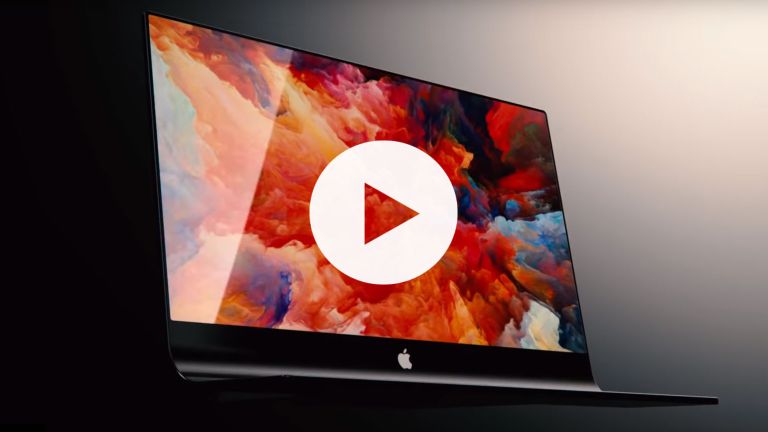 Earlier this week, the Samsung Galaxy Z Flip was unveiled to a packed crowd in San Francisco, with its impressive (and, in some cases, divisive) folding glass technology ushering a new era for flexible devices.

Previously, Apple has been rumoured to be quietly working on its own foldables, as is every major technology manufacturer. However, new evidence has come to light that before we see a foldable iPhone or iPad, we might see a flexible desktop iMac designed as a single sheet of glass.

Dutch outlet LetsGoDigital has found a patent filed by Apple on January 23, 2020 for an iMac comprised of a single flexible "glass sandwich" like a smartphone. With all the technology encased in the slender glass pane, one third of the iMac will be able to bend, displaying a keyboard, with a rear kickstand behind the screen for stability. The stand could also hold the ports that would be difficult to integrate into such a slender design.

Curved glass is nothing new, but the key is incorporating the bending glass into a hinge, much like the Z Flip does into its seam, in order to flex while still keeping the screen intact. This is not a true hinge, as such, and it's never shown bending more than 90 degrees. The computer will also be able to straighten out in order to slip into a case for easy transportation.

Render artist Concept Creator has taken the elements listed in the patent and created an incredible concept render detailing what the new iMac might look like. Check the video out below:

The patent lists options for both a physical keyboard and a digital one. While physical keyboards feel much more tactile, we can see the appeal of a digital keyboard on a device like this: the temptation for Apple to create that "single sheet of glass" look it loves so much would understandably be too great.

Nevertheless, there's a lot to love in a device like this: while it's not a true foldable as such, we could see smaller versions of this fitting the iPad very well, functioning as a tablet until you flex the screen into "keyboard mode".

However, it's interesting to know the technology is in the pipeline, and it shows Apple is keeping a watchful eye on its flexible competitors, like the Z Flip and the Motorola Razr. Will we see a flexible iPad, MacBook or iPhone in the near future? Watch this space.