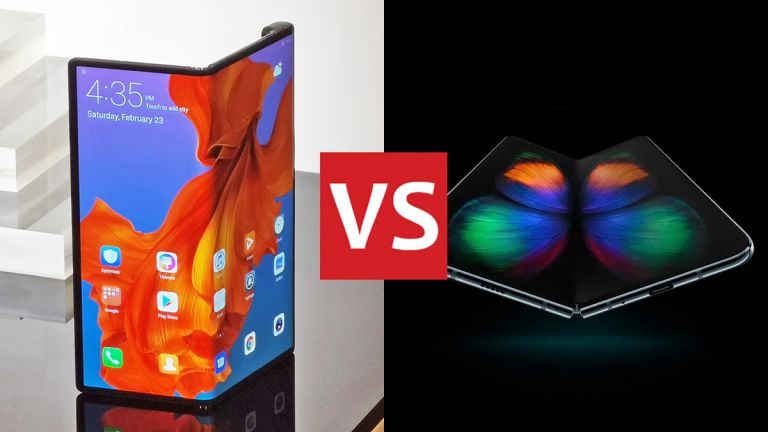 We're not far into 2019 but already we've seen what are likely to be two of the stand-out handsets of 2019: the Huawei Mate X and the Samsung Galaxy Fold, representing the start of a wave of incoming foldable phones that could transform the entire mobile industry.

So how exactly do these two folding phones stack up against each other? And which (if either) should you be spending thousands of pounds (or dollars) on? Here we're going to fill you in on how the devices compare in all the areas that matter, from design to specs.

Which one you prefer is up to you, but the Huawei approach leaves the screen open to scratches in your pocket, while the Samsung approach seems as though you would have to worry more about wear and tear – and also introduces another separate screen on the outside of the device (when folded).

The Huawei Mate X has the bigger screen overall, measuring 8 inches against the 7.3 inches of the Samsung Galaxy Fold when both devices are in tablet mode. When opened out the Samsung device has a notch that holds two forward-facing cameras, whereas the Huawei phone is all screen, with the cameras on the back.

In the case of the Huawei Mate X, the cameras are built into a little lip or chin that helps you hold the device in tablet mode, and helps to dock the folded phone a little more easily when it's closed. Overall we'd say the Huawei Mate X wins in terms of pure aesthetics, but the Samsung Galaxy Fold is a great-looking foldable phone too.

Aside from the looks and the screens of these two devices, we've got some specs to think about. Under the hood of the Huawei Mate X there's a Huawei Kirin 980 processor – the fastest processor Huawei makes at the moment – as well as 8GB of RAM and 512GB of internal storage, as well as a memory card slot.

Over on the Samsung side, the Samsung Galaxy Fold has a Snapdragon 855 processor – pretty much top of the line for Android phones in 2019 – together with a whopping 12GB of RAM and 512GB of internal storage, though you can't expand that with a memory card. It's just about honours even in the performance stakes, with Samsung maybe just edging it.

Remember that plenty of phone performance has to do with software and hardware optimisations implemented by the manufacturer, so we'll have to see how these two devices perform in the real world and how well they do at snapping between the different folded and unfolded modes (Android Q might help here later in the year).

The main feature here, in case you missed it, is that these phones are foldable – and so you might expect the Huawei Mate X and the Samsung Galaxy Fold to skimp on features elsewhere, but that's not the case. Both come with the latest Android 9.0 Pie software on board, for example, though Huawei and Samsung both put their different skins on top.

There are some shortcuts taken however, compared with the very top smartphones currently on the market – you don't get any wireless charging capabilities on either the Huawei Mate X or the Samsung Galaxy Fold, and there's no waterproofing and dustproofing either (probably due to the fold).

Both the Huawei Mate X and the Samsung Galaxy Fold use a side-mounted fingerprint sensor to get past the lock screen, and both use a USB-C socket for charging and data transfer. Neither of these phones have managed to pack in a 3.5 mm headphone jack.

As for the other hot technology of 2019, both these folding phones are going to come with 5G, or at least have 5G models available if you want to pay extra – if the infrastructure has rolled out in your area, you can enjoy blazing fast download and upload speeds with both the Huawei Mate X and the Samsung Galaxy Fold.

As yet we haven't mentioned price – Samsung's phone starts at $1,980 in the US and €2,000 in Europe, whereas the Huawei Mate X won't be available in the US and will set you back from €2,299 in Europe. No UK price has been announced for either handset but if you convert straight from euros it's £1,705 for the Galaxy Fold and £1,960 for the Mate X.

In other words, you're going to pay slightly more for the Huawei hardware. The Samsung Galaxy Fold is available in more colours by the way, too – silver, black, green and blue, compared with just the blue model for the Huawei Mate X. It's maybe not the most important consideration, but it's worth mentioning.

With similar specs, similar software and a similar sort of price, you really need to decide which of the folding mechanisms you like the look of most... or perhaps which company you trust more to make a device that can withstand constant folding without suddenly snapping on you.

Ultimately though, the direction of the fold aside, these are two very well matched phones – both helping to pioneer a brand new category of smartphone. In the years to come we might all be using foldable phones, and we'll be able to point to the Huawei Mate X and the Samsung Galaxy Fold as the point where it all started.