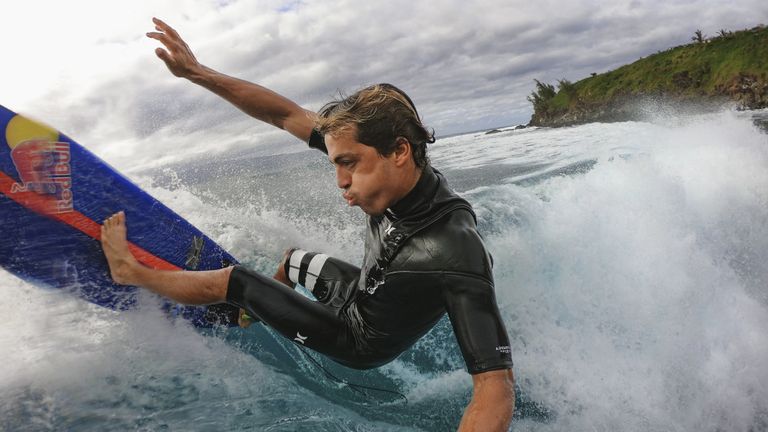 The Max is designed to be a stand-alone product and will not be part of the official Hero action camera range.

The Hero 8 Black is available for pre-order now, with shipments beginning Tuesday 15 October. The Hero 8 will be available at select retail partners around the world starting Sunday 20 October.

The GoPro Max is also available for pre-order at GoPro today, priced £479.99/$499.99, with shipments beginning slightly later on Thursday 24 October. GoPro’s new 360-degree camera will be available at select retailers internationally on 24 October and in the US on 25 October.

GoPro has also confirmed to T3 that the Hero 7 White will no longer be available and that the GoPro Max will replace the GoPro Fusion 360-degree camera.

You can see how the new GoPro compares to DJI's highly rated rival in our GoPro Hero 8 Black vs DJI Osmo Action head-to-head.

The most obvious thing you’ll notice when first looking at the GoPro Hero 8 Black is that it has a unique frameless design fitted with two ‘folding mounting fingers’ at the base. These magnetic fingers lie flat when not in use, but pop them out and you can use the camera with a mount or similar accessory of your choosing. The Hero 8 Black is also lighter than the Hero 7 Black when placed in its casing: 124g for the newcomer, versus 142g of the 7 Black in its casing.

If you want to skip straight to knowing what we think of GoPro’s new flagship action camera, read our official GoPro Hero 8 Black review. We’ve spent time mountain biking and surfing with the camera, as well as using it on a more general basis, to find out how it compares to the T3 Award-winning GoPro Hero 7 Black and the biggest GoPro challenger to date, the DJI Osmo Action.

In a nutshell, the Hero 8 Black builds upon the success of the Hero 7 Black with next-gen HyperSmooth 2.0 video stabilisation, which takes the already world-beating HyperSmooth 1.0 to a new level. The revamped version of GoPro’s industry-leading tech now improves pitch-axis stabilisation and works across all frame rates and resolutions as standard, which is very impressive.

The GoPro Hero 8 Black is a 'production powerhouse'

The Hero 8 Black action camera also brings with it TimeWarp 2.0, with automatic speed adjustment based on motion, scene detection and lighting. Or you can tap the screen to slow down to real time and again to speed back up.

GoPro Founder and CEO Nick Woodman has gone on the record to state: “It’s been 15 years since the first GoPro camera, and from the start, we’ve been about enabling people to share their passions whether they’re fuelled by adrenaline or artistry,” said Woodman. “HERO8 Black, the Mods and MAX redefine what’s possible with a camera.”

The GoPro Hero 8 Black features four digital lenses to make it easier for you to select the ideal field of view: SuperView, Wide, Narrow and zero-distortion Linear. The field of view changes in real-time on the action camera’s touchscreen when you toggle through the different lenses.

Audio has also been improved, with enhanced wind suppression on the front-facing microphone making shooting outdoors easier. There are also all-new capture presets which GoPro has created so that you can intuitively select the right setting for different activities – these are Standard, Activity, Cinematic and Slo-Mo. With these capture presets, the ideal settings for the activity you're filming are just a tap away.

A revamped SuperPhoto feature delivers ghost-free HDR action photos, and all-new LiveBurst captures 1.5 seconds of 12MP (4K 4:3) footage before and after the shutter.

The other most exciting thing about the Hero 8 Black, the Mods, will undoubtedly be a source of temporary frustration for some people. Why? Because the GoPro Mods won’t be available for pre-order until December. That may irk some fans who want the complete Hero 8 Black package all at once.

GoPro has designed the Mods to transform the Hero 8 Black into a ‘vlogging or production powerhouse’. This new modular ecosystem comprises the following:

The GoPro Display Mod is a folding front- or rear-facing 1.9-inch display that attaches to the top of the Media Mod. You could use it to better frame vlogging shots.

The Light Mod, waterproof to 10 meters (33ft) is both wearable and mountable, making it perhaps the most exciting of the three. This rechargeable light is also the most versatile, as it can be mounted to the Media Mod or attached to one of your existing GoPro mounts. It also comes with a diffuser to soften lighting when filming with the Hero 8 Black.

The GoPro App has also been updated so that it now includes the award-winning Quik editing functionality. The app now also supports GoPro and phone content in edits, and enables filters to be applied to single clips as well as multi-clips, and now streams live at full 1080p on both the Hero 8 Black and GoPro Max.