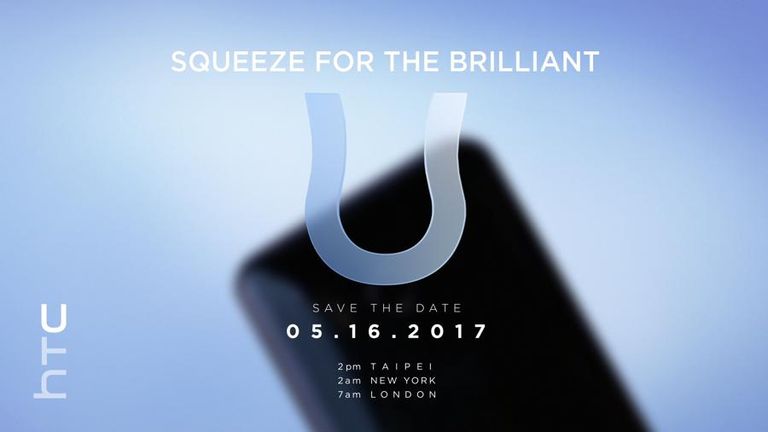 After missing MWC, we’re expecting HTC to announce it’s flagship smartphone any day now. Supposedly, it’s going to be called the HTC U (or perhaps, HTC U 11), as the company moves away from the One MXX naming scheme, and it’ll be a bit more experimental with a few exciting, innovate features, similar to LG's range of flagships.

That should mean HTC’s 2017 flagship is an interesting one, and we can’t wait to see what the Taiwanese company has up it’s sleeve.

These are the latest rumours and leaks about HTC’s upcoming flagship:

HTC usually uses MWC to announce its flagship device, but it skipped this year. While most smartphones announced in Barcelona are now in consumers pockets, HTC has taken a little longer to add some finishing touches to its flagship device.

HTC will be announcing the U on 16th May, 2017, at 7AM (BST). You’ll be able to watch the unveiling over live stream, and get the news right here on T3.com, of course.

Hopefully you’ll be able to purchase the phone before the end of the month.

Smartphones are getting more and more expensive, and some of the rumoured features (below) won’t come cheap. So naturally, we’re expecting the U to cost a little more than HTC’c last flagship, the M10.

A recent GeekBench listing, with the phone codenamed HTC CBP, shows what we can expect in the power department. The HTC U 11 should come packing the latest Qualcomm Snapdragon 835 CPU running at 1.9GHz backed with 6GB of RAM. The resulting tests show a phone that’s powerful enough to give the latest Samsung Galaxy S8 flagship handset a run for its money.

While the benchmarking scores are similar to Samsung’s best efforts it will remain to be seen if the phone’s OS is able to run as quickly. This test was done on the handset with Android 7.1 Nougat but when HTC puts its UX skin over the top that could change the real-world result. Nonetheless it’s a super-fast place to start from.

Most other specs have leaked been leaked by MySmartPrice, shown in the image above.

Display wise we’re looking at a 5.5-inch QHD screen. We’re not expecting anything fancy though, like a curved edge or second display (as found in the U Ultra).

Spec wise then, we’re looking at a proper flagship here from HTC.

We’ve always been impressed with HTC’s industrial design. In the past HTC’s flagships have crafted from a single block of aluminium. Recently, with the U Ultra, we’ve seen HTC move away from the aluminium unibody design to a fluid glass and metal enclosure.

Fairly standard looking phone, then. A recent tweet from the official HTC Twitter account suggests the device will be pretty skinny. You can watch it below:

The launch invitations sent to press included the zany slogan ‘Squeeze for the Brilliant’. This suggests you'll be able to squeeze the sides of the HTC U, and the pressure sensitive edges will act as buttons - performing tasks such as launching an app or taking a photo.

Camera rumours comes from serial leaker Evan Blass, who claims the HTC U will feature a 12MP rear camera with an f/1.7 aperture, and optical image stabilisation. It’ll be branded as ‘UltraPixel 3’.

The front facing camera will be a 16MP camera. It looks like you won’t be getting a dual-lens setup this time around.

Finally, audio is always a key feature on HTC phones. We’re expecting BoomSound to return with two speakers. The U will also come with USB-C earbuds which scan your ear canals and adapt the phone’s audio profile to your hearing, oh, and bin your 3.5mm headphones now, as HTC is likely dropping the headphone port.