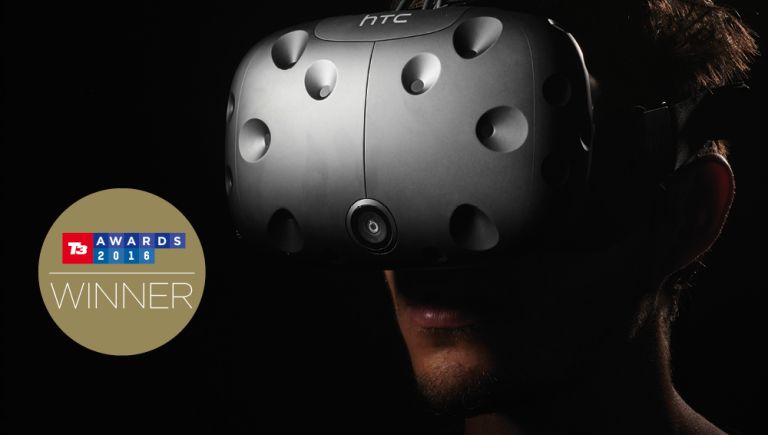 The most prestigious of all the gongs at the T3 Awards, this represents the gold standard in gadgetry for 2016. The winning product will have transcended its particular category, as well as capturing the attention and affection of consumers – both tech-loving and mainstream – more than any other piece of kit over the past 12 months.

Ultimately, our Gadget of the Year will stand out at the very top of its class – the best you can get.

While you could argue that virtual reality is still in its infancy, and the products associated with it are relatively niche, there's no doubt that it's one of the most exciting areas of tech out there right now. And at the forefront of the revolution, there's the HTC Vive. _ e Vive is a worthy winner of our most prestigious award, being a game-changer in every sense of the word. Fire up your PC, strap on the headset, grab the controllers, and you're ready to be immersed in gaming worlds like no other. A major part of the Vive's appeal is its full-body tracking.

Attach the two sensors to your walls, and the Vive will map your room, making sure you don't bump into anything and giving you a playable area that works in virtually any space – and what's more, you can see your lounge or gaming room as a wireframe representation when you're not in a game. Once you're in a SteamVR game (of which there are plenty), you can wander and look around as if you were there. And the innovative controllers make it possible to interact with objects in these virtual worlds.

It really has to be seen to be believed – and once you start, it's tough to stop. Let's go back to the controllers for a moment – these work almost like magic, with the tracking being so accurate, you can throw them up in the air and catch them with the headset on. And it's great fun when they turn into guns or other futuristic controllers. Some of the launch titles were just wondrous – in particular, the incredible Tilt Brush from Google, which made it possible to paint with light in a virtual space, and then explore and interact with your art. Another was Hover Junkers – a rip-roaring multiplayer shooter that put you on a hovercraft.

Whatever the game, the Vive lets you experience it like never before. _ is product, along with Oculus's Rift, pioneers the way for a new age of gaming. And with the PlayStation VR just around the corner, it can only get more exciting. As we said in our review earlier this year, the HTC Vive isn't just another consumer tech product; it's a work of art and a stroke of magic. And therefore, it's our well-deserved Gadget of the Year.

The contenders for T3's Gadget of the Year

HTC Vive – the winner (above)

HTC has shot into the lead in the race to put VR in your home, with the Vive being amazing straight out of the box. Set it up, stick it on your head and become immersed in an awesome new experience – your gaming life will never be the same again.

Sky Q enables you to watch recordings, on-demand programmes and Sky Store purchases wherever you happen to be, thanks to some Sonos-style multi-room skills. Sky has comprehensively re-thought itself to suit contemporary viewing habits.

The iPad Pro's purpose is clear – it's not a laptop replacement but a Super-iPad, offering a rich, high-res screen, great sound through quad speakers, trick True Tone lighting, and Apple Pencil and keyboard support. It's every iPad you'll ever need.

The Rift VR headset has had to grow up in public, with all eyes on every beta release and test. Finally getting its official release this year, it hasn't disappointed –­and there's much more to come from this stunning gaming gadget.

Samsung's luxurious range-topper isn't just glorious to behold and glorious to hold, it's also power-packed, feature-wealthy and has such a lustrous screen that London's Holi Festival of Colours (look it up) seems washed-out by comparison.

There's a compelling argument that the 'S' updates of the iPhone are the ones to buy, as they marry the previous model's form with updated internals. Whatever, the 6s is beautiful, slender and tactile, with great cameras and some top features.

The Surface Book is unlike other laptops or tablets – the Windows 10 headline act packs unfeasible processor power, making it probably the most versatile convertible out there. And the Surface Pen is a stunning stylus.

Garmin sexed up the GPS-watch arena with the Fenix 3 Sapphire. Packing all the gadgetry you'd expect from a rugged, multisport tracker (and probably a few you wouldn't), the Sapphire has you covered whatever outdoor sport you take part in.

We were blown away by the Qb from the moment we first clapped eyes on it at CES 2016, to when it started pumping beats around the office. Fabulous looks whatever colour you choose, paired with superb sonics, equals a winner – and speaking of pairing, the Qb's reliable connectivity and multi-room possibilities are the icing on the cuboid cake.

You know something special has happened when a product that you'd have previously laughed at suddenly becomes absolutely necessary in your home. Immediately. Samsung's Family Hub smart refrigerator is more than just a fridge with a tablet attached – it's an all-in-one food monitoring, information and entertainment zone. Oh, and did we mention it keeps your food fresh?

Liked this? Then check out our guide to the best gadgets around at the moment