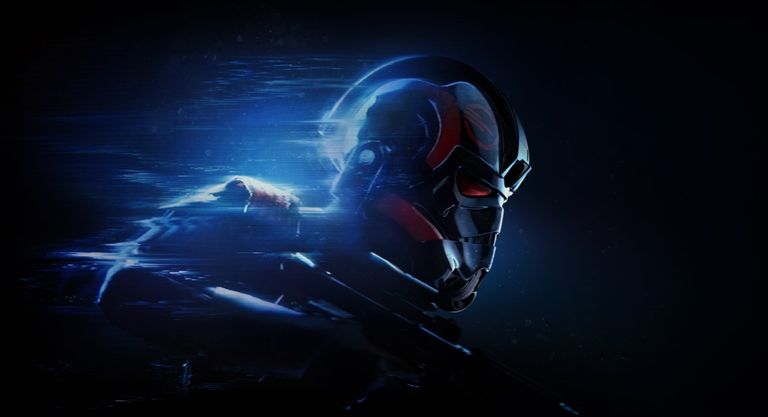 Building on the core mechanics that made Star Wars Battlefront such a hit, Swedish studio DICE has delivered a shooter sequel that improves on its formula in the all right places, refines its multiplayer systems and adds in the campaign that was sorely missed first time around. However, it’s also weaved in a convoluted microtransaction system that takes some of the sheen off an otherwise stellar package.

Single-player is where Battlefront 2 makes its first big improvement on the original. Across its 12 chapters you follow the story of Iden Versio, a commander of an elite unit tasked with bloodying its nose in the dirtiest fights the Rebellion has to offer.

Running in the Frostbite engine, and funnelled through a linear narrative path, Battlefront II’s campaign offers an experience that channels the all-out mayhem of the first Force Unleashed game and the tactical warfare of Republic Commando.

Motive - one of two studios brought on to support DICE - does an admirable job of building a canonical story that takes place during the main Star Wars saga, in its immediate aftermath and beyond. While it does stumble occasionally with its narrative choices - with characters occasionally making completely inexplicable shifts in character simply to serve a story beat - the campaign never feels shoehorned in.

You’ll certainly never get bored with the six or so hours of content it serves up. Missions regular offer the chance to jump into TIE Fighters, X-Wings and other instantly recognisable vessels from the saga, and with refined flying mechanics that are far less unwieldy that the original, it’s basically the closest thing you’re going to get to a Rogue Squadron or Starfighter reboot.

In other words: whether it’s atmospheric dogfights or intense duels in the black void of space, BF2's vehicle sections (and that includes Starfighter Assault in multiplayer) are everything you’d want a Star Wars flight sim to be.

Still, that doesn't change the fact the campaign plays like an offline version of a game designed from the ground up to be a pure online experience. Firefights are still fun and challenging to a point, but the AI lacks the creativity and aggression of real players. In fact, the AI only poses any real threat by simply throwing hordes of stormtroopers at you in any given fight. There’s also a few attempts to employ stealth, but it’s a mechanic that simply doesn’t fit the rest of package so it comes off as half-baked.

There are some standout moments, though. One mission later in the game places you in a famous and pivotal battle (we won’t spoil which one, but you’ll know it when you reach it) and offers one of the most dynamic and creative elements across any of its modes.

You’ll pilot an X-Wing, engage in dogfights, land your ship, engage in a pitched battle, then jump right back in your starfighter for some more aerial duelling. Bar some brief cuts, it’s pretty much done in real-time and proves Battlefront’s myriad systems can combine to create something truly unique. As a solo campaign, Iden Versio's story makes a confident case for single-player content in the Star Wars universe going forwards.

So let’s talk about the real reason you’re reading this review - the multiplayer, and how its core experience is so closely bound to microtransactions. DICE has done more than just upgrade graphical performance and add in some new Star Cards (a series in-game collectible cards that grant special abilities and weapons) - it’s completely rewritten how its matchmaking works, introducing a traditional class system that fosters a far more succinct drive towards teamwork and using class-specific skills (such as the Officer’s talent for healing, or the Heavy’s blaster shield).

Problems with the abnormally slow grind between levels present in the original Battlefront have also been addressed, with in-game points doled out far more generously, even for players who die consistently. Even racking up kills and playing to objectives in the vicinity of the squad you’re randomly placed in after spawning yields more points. You can then spend the balance you’ve banked on more powerful characters (ranging from Wookie warriors to Heroes such as Kylo Ren or Darth Maul), or more souped-up vehicles.

It’s a system that works far more efficiently and fairly than the mad dash for tokens that sparingly littered the battlefields of the original game. Along with the improved flying mechanics showcased in the campaign - and used to far greater effect in the re-tuned and brilliantly enjoyable Starfighter Assault mode - it’s just one part of an evolution that far surpasses the spartan affair operating beneath the first Battlefront’s beautiful recreation.

Talking of authenticity, you’ll love how all three eras are represented. Being able to battle through the palatial, sun-baked streets of Theed as a B1 Battle Droid, throttling through the void of space as a clone pilot in an ARC-170 starfighter or unleashing the might of the First Order as Kylo Ren channels the magic of every chapter of the Star Wars saga into one evocative package.

That package, as you’ll no doubt have noticed from its heavy coverage in the games press leading up to release, comes with a caveat - the loot box. The industry is shifting in its approach to economising games, and EA and DICE have created an economy all their own within the confines of BF2. At the heart of this setup are Star Cards, which are tied to the four main classes, each hero/villain and two specialist classes. The more cards you own for a class, the more abilities you can equip at one time.

These cards can also be upgraded, but these are locked behind a wall that requires you to reach a certain level first. The best way to unlock new cards are with - you guessed it - purchasing loot boxes (or Supply Crates as they’re known in-game) and herein lies the problem with the convoluted setup.

You can either purchase these crates with credits (earned by completing matches) or with crystals (which you buy with real money). Since each classes level is tied not to an XP metre but to the number of cards you own, it’s a system that will ultimately reward those with bigger pockets from the off.

Despite the unclean presence of microtransactions and how deep they’ve been built into the fabric of BF2’s online modes, there’s no denying just how accomplished every other facet of the game truly is. With the Frostbite engine at its disposal, DICE has created a Star Wars experience every bit magical as the films that inspired it. Every mechanic has been fine tuned, every core system rebooted to reward teamwork and tactical awareness. It's a brilliant package, and an accomplished shooter to boot, but it's one that ultimately diminishes itself by embedding microtransactions so deeply in its DNA.

This game was reviewed on Xbox One.