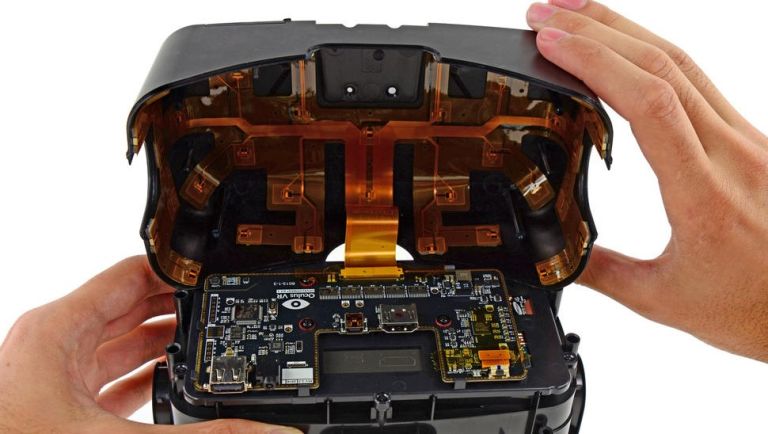 Should you invest £499 on an Oculus Rift CV1 headset, we doubt the first thing you'll do is whip out the toolkit and start breaking down your new purchase into its composite parts. Should you still be a little curious as to what really lies beneath that sleek black shell, one group of VR enthusiasts has you covered.

Crowdsourced repair guide site iFixit is the one with deconstruction on its minds and its fascinating investigation shines a light on the tech Oculus has used to make the rift such a powerful VR headset.

It turns out the Rift is using two custom displays, rather than Galaxy Note Oculus was using in the dev kit versions a couple of years back (it was also iFixit that discovered this when it did a similar deconstruction back in 2014). These bespoke displays are 90mm diagonally each and with 456 pixels per inch, offering a higher ppi than the iPhone 6S Plus but lower than that of the Galaxy S7.

The iFixit investigation also reveals the design of its optics - the Oculus Rift uses Fresnel lenses that use concentric rings to wrap the output of the displays around each eye of the user. These particular lenses have a special thickness that makes them especially clear and adjustable for use with the movement of VR.

Check out the video below for more info and the sight of a very expensive bit of kit being carefully taken to bits.

Why not check out: PlayStation VR ultimate guide: everything you need to know about Sony's VR headset