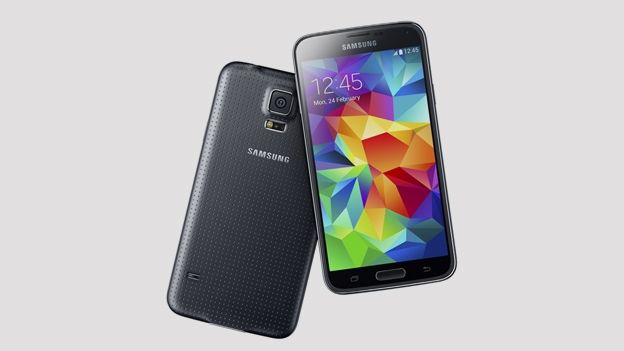 The Samsung Galaxy S5 is set to be one of the biggest smartphone launches of 2014.

The Galaxy S5 was launched to a packed audience all waiting to find out what Samsung had up its sleeves.

As it turned out, its a smartphone that is a lot more refined that the Galaxy S4, shedding a lot of the gimmicks, instead focusing on what made Samsung's smartphone the most popular handset on the planet.

This is an article about the Samsung Galaxy S5. We'll be rounding up all the latest news and rumours about the handset in the run up to its unveiling next year.

For other Samsung news, check out our Samsung News Hub.

Samsung looks set to hold the first of its annual keynote events Samsung Unpacked at Mobile World Congress. The company is unlikely to hold another major event in March, so it looks increasingly like that Samsung will show off the Galaxy S5 for the first time at the show.

It looks as though our prediction could well be correct with the Samsung Galaxy S5 release date being set for April after a Samsung executive confirmed that the S5 would launch alongside the Galaxy Gear 2 at the same time it launched the S4 last year.

As for when you'll be able to get your hands on it? If we were betting people, we'd say the last Friday of April – so Friday, April 25th.

Despite that promise, it appears that Samsung may not be matching it when it comes to it being 64-bit. According to KGI Securities' Ming-Chi Kuo, the Samsung Galaxy S5 will come in two varieties, but neither will have a 64-bit processor. The Prime is said to be coming with a Samsung octa-core Exynos 5430 processor, while the Standard model is said to be coming with a quad-core Snapdragon 800 processor.

While it may not match it in terms of the amount of bits, if it turns out the Prime model does come with a octa-core processor, Samsung could out do Apple in sheer brute force. The lack of 64-bit support could also have something to do with both models only coming with 3GB RAM, according to Ming-Chi. The main reason for moving up from 32-bit chips is to break through the 4GB limitiation.

If Samsung is planning on sticking with 3GB of RAM, it makes more sense for it to opt for raw power, rather than add a feature which isn't really going to be used.

Samsung had confirmed that it is working on 64-bit processors for its 2014 handsets - although the company stopped short of actually announcing which handsets they were. If it turns out that Ming-Chi is right – and he has a history of being right – it may mean we have to wait until the Galaxy Note 4 before we see it.

To be honest, it would make more sense for the time being for the Galaxy Note 4 to debut 64-bit chips. Along with giving the company more time to perfect the technology (see below), it would also make more sense to pack its powerhorse phablet with more RAM – and so benefit from a 64-bit chip.

Stephen Woo, president of Systems SI at Samsung electronics told CNET that the company is taking a “two-step approach” to developing 64-bit chips.

According to Woo, the firm is planning on developing a 64-bit chip based on designs from ARM. Once it has mastered that technology, it will design its own chip. It is believed it will be the latter chip that ends up in both of Samsung's 2014 flagships smartphones.

One other snippet of information we have is that the Samsung Galaxy S5 will supposedly feature fast charging capabilities. According to sources speaking with PhoneArena, the next Galaxy will arrive with a new type of lithium ion battery that will hold 20 per cent more energy than the S4 and can be fully charged in just two hours.

The Samsung Galaxy S5 will sport an entirely new design according to Samsung Mobile executive vice president Lee Young Hee. Speaking to Bloomberg she confirmed that the S5 would be a bold departure after consumer feedback suggested that people didn't really see the difference between the S3 and the S4.

This would certainly fit with the rumour that claimed Samsung is looking to move away from using polycarbonate back covers for its phones.

According to ET News, the company has sent engineers to Vietnam to investigate the feasibility of making smartphones with aluminium and magnesium backs.

The report claimed that some figures at the Korean manufacturer are concerned that the recent introduction of a plastic-backed 'budget' iPhone – the iPhone 5c – could make buyers think all plastic-backed smartphones are budget devices.

Perhaps we can find a clue in the recent Samsung Galaxy Note 3 - on that handset Samsung has replaced the traditional polycarbonate with a new faux-leather, stitched rear cover.

It had looked like the Samsung Galaxy S5 will launch with an entirely new-look version of TouchWiz, the user interface that Samsung uses over the top of Android. However, a reported agreement between Samsung and Google could mean you're stuck with a much more Android looking version of TouchWiz.

According to reports, Google has pulled Samsung to heel over its attempts to move Android too far away from Google's vision for the operating system. To get an idea of how big a deal it is for the two companies, it is rumoured that Google's sale of its Motorola business to Lenovo was the bagaining chip Google used to bring Samsung in line.

Leaked screenshots courtesy of @evleaks seeemingly confirm this rumour and if the images are anything to go by then Samsung will be making a major departure from its current design language, opting for a more minimal stylish design.

New screenshots from evleaks now show just how far removed the new design will be with the homepage sporting a type of newsfeed similar to HTC's BuzzFeed found on the HTC One.

Will Samsung do the unthinkable? Could it drop Android in favour of the Tizen mobile operating system – co-developed by itself and Intel?

A year ago, such a situation would have been unthinkable.

However, following a period of tension between Samsung and Android-developer Google earlier this year – including not a single mention of Android at the launch of the Samsung Galaxy S4 – it isn't as unfeasible as it once was.

Indeed, Samsung co-CEO Boo-Keun Yoon revealed that Samsung plans to connect all of its devices together with the new operating system. That includes its mobile phones.

While he stopped short of suggesting that the company will drop Android, it certainly won't be easy reading for Google.

At the beginning of September, reports began emerging that Samsung is working on a slimline 16 megapixel smartphone camera with optical image stabiliser (OIS) technology.

And with the leak of an image supposedly taken using a Samsung Galaxy S5, it looks like we might be right. The photo's EXIF data revealed that the photo comes with a resolution of 5312 x 2988 pixels. If suggestions that the phone will come with a 16:9 sensor are true, then that would peg the phone's rear camera at a 16 megapixels.

At the time of writing, there is only one smartphone in Samsung's range that comes with OIS, and that is the less-than-slimline Galaxy S4 Zoom.

According to GSMarena, who broke the story, the new lens has been designed to fit in its slimline range of smartphones.

Samsung has reportedly ditched the iris scanner from the Galaxy S5. The feature had been rumoured for some months. Samsung was understood to have been looking at alternative technologies to fingerprint scanners so as not to appear to be following Apple's lead. However, technical issues have lead to it falling back to fingerprint scanners as a way of adding security to the device, according to the latest reports.