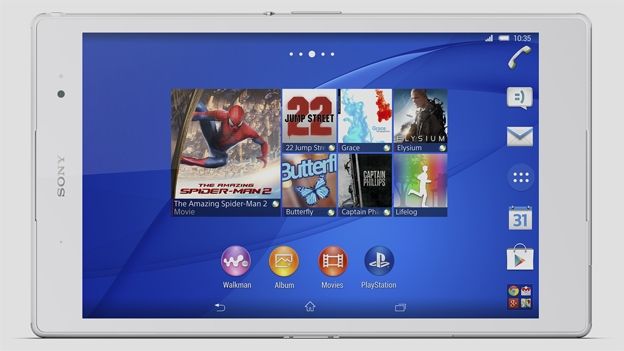 A svelte chassis, meaty specs, and PS4 remote play. We'd have to say it's looking good for Sony's new tab...

Amongst the IFA torrent of Sony-stamped goods is the Japanese firm's latest slate - the Xperia Z3 Tablet Compact.

Lengthy monikers aside, the Z3TC touts a raft of impressive stats, all packaged within what Sony reckons is the world's 'slimmest and lightest' compact tablet.

At its circuit-board heart sits a nippy 2.5GHz quad-core Snapdragon 801 CPU, an integrated Adreno 330 GPU, and 3GB of RAM.

There's 16GB of storage built-in, but a microSD slot will allow for this to be boosted by a further 128GB.

Snaps come courtesy of a rear-facing 8.1MP Exmor sensor, paired with a 2.2MP front-facing shooter that can record video in HD.

Sony's also making quite a fuss about its ultra-portable tab's form factor, and rightly so. The svelte slate is just 6.4mm thick (or rather, slim) and weighs in at just 270g.

"Following on from the success of our award-winning Xperia Z2 Tablet, we're continuing to expand our tablet portfolio with the launch of the no-compromise compact tablet," says Calum MacDougall, Sony Mobile's Direct of Product Marketing.

"Xperia Z3 Tablet Compact pushes the boundaries of technology innovation by bringing our flagship Z3 series features in a compact size, continuing our new standard of offering premium experiences in a choice of form factor for consumers."

It's also the only tablet with PS4 Remote Play, a pretty hefty boon to the slate's commercial value.

PS4 Remote Play, currently exclusive to Xperia (for now, at least), will let Z3 Tablet Compact owners use their slate as a remote screen for PS4 games.

The tablet can connect to a DualShock 4 controller via a mount, meaning you'll get the full gaming experience straight from your Z3TC.

You can also use the tablet as a second-screen to remotely view your mates' gameplay, talk to your e-pals, buy games, and download content to your PS4.

The tablet will ship in either white or black, depending on your preference.

Sony's latest slate also offers some ingenious audio tinkering, namely its DSEE HX tech that lets you 'upscale' the quality of your music.

It's worth mentioning that it can'ttrulyupgrade the fidelity of your tuneage, hence the quotes. It's just software gimmickry.

The Xperia Z3 Tablet Compacy is set to land globally this autumn, and will be offered in both LTE and Wi-Fi variants.