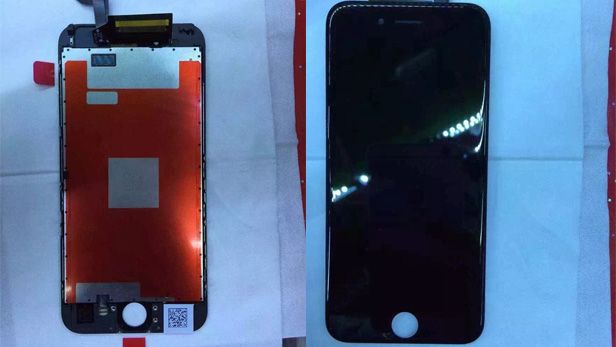 Apple's next handset is expected to grace us with its presence next month, so leaks and rumours in the run-up to launch are inevitable.

Exemplifying that is a series of new photos purporting to show a fully assembled iPhone 6S display module. The photos come courtesy of GeekBar (via Nowhereelse.fr).

Compared to the iPhone 6 and iPhone 6 Plus, the display appears to incorporate the same rounded edges and general shape, with no change to ear speaker or camera positioning. Although, there are a few differences that stand out.

In these images, the 6S shielding appears to be riveted on all four sides, which is a major departure from existing iPhone display backings which are held on by screws and clips. AppleInsider reckons these black dots could potentially be related to Force Touch, a feature rumoured for inclusion on the next iPhone.

This theory back yesterday's report which suggested Apple's supply chain was currently in the process of ramping up Force Touch display production.

Of course, there's no way to be sure until Apple officially talks. But considering the pressure-sensitive tech already featured on the Apple Watch and the new MacBook, it would be more surprising for Apple not to include Force Touch on its next handset.

Apple is widely expected to release its next-generation iPhone models, which may include the iPhone 6S, iPhone 6S Plus and even an iPhone 6C, at a special event in September. As of yet though, no details have been disclosed.

Liked this? Why not read Who is Richard Howarth? How Apple's 'badass' iPhone designer flew under everyone's radar