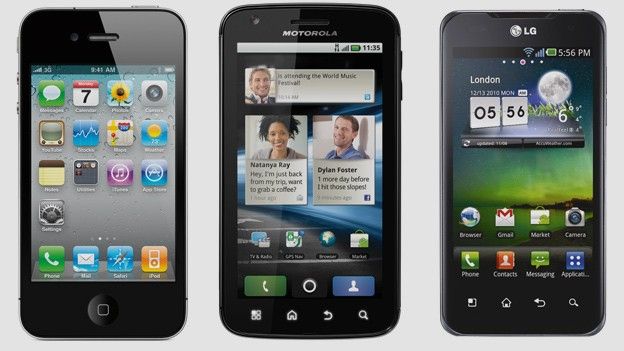 To many, the iPhone 4 is still regarded as the pinnacle of smartphone greatness, with its stylish looks, slick UI and all those apps to play with.

The dual-core processing packing Motorola Atrix and LG Optimus 2X are just two from a growing Android army set hoping to steal some of the Apple limelight.

How do they match up against T3's best mobile phone pick though? We pit the three smartphones up against each other to find out where you should be spending your money.

Motorola Atrix: Although the Atrix feels solid, it doesn't have the quality feel of the iPhone. The design is also a little plain. (Second)

Apple iPhone 4: With its glass screen and stainless steel band the iPhone 4 is an exceptionally sexy, slim and solid handset. (First)

Apple iPhone 4: Exceptionally intuitive and essentially idiot-proof, though not as flexible as Android in some respects. (First)

Motorola Atrix: The four-inch, 960x540 screen is bright and offers pretty good off-angle viewing. No match for Apple's, though. (Second)

LG Optimus 2X: The four-inch screen has the lowest resolution on test at 800x480. It's not bad as such, but it's also not great. (Third)

Motorola Atrix: Apps are yet to make the most of the Atrix's dualcore, but it's certainly quick. (First)

Apple iPhone 4: The iPhone 4 has a single-core processor, but is still by no means slow. (Third)


LG Optimus 2X: Has exactly the same processor as the Atrix and matches it for speed. (First)

Apple iPhone 4: Choose from 16GB or 32GB of storage, but there's no expansion slot here. (Third)

LG Optimus 2X: 8GB of internal storage is backed up by a microSD slot for up to 32GB more. (Second)

Motorola Atrix: HDMI, N Wi-Fi with DLNA, and Bluetooth are supplemented with Moto's various docks. Nothing else can touch it. (First)


Apple iPhone 4: No HDMI or DLNA, although AirPlay lets you stream to a small number of Apple Certified devices. (Third)

LG Optimus 2X: Along with the usual Wi-Fi and Bluetooth, you get DLNA compliance and very cool HDMI mirroring. (Second)

Motorola Atrix: The Atrix has excellent connectivity and a great UI. The range of connectivity options make it a very different beast to the iPhone. (Second)


Apple iPhone 4: The iPhone 4 remains the best smartphone you can buy, but can it turn, albeit slightly clonkily, into a laptop? No it cannot… (First)


LG Optimus 2X: The Android UI isn't as effective without Motorblur and the screen is a cut below the other two, but this is still a wickedly powerful handset. (Third)

Motorola Atrix: Free from £40 per month