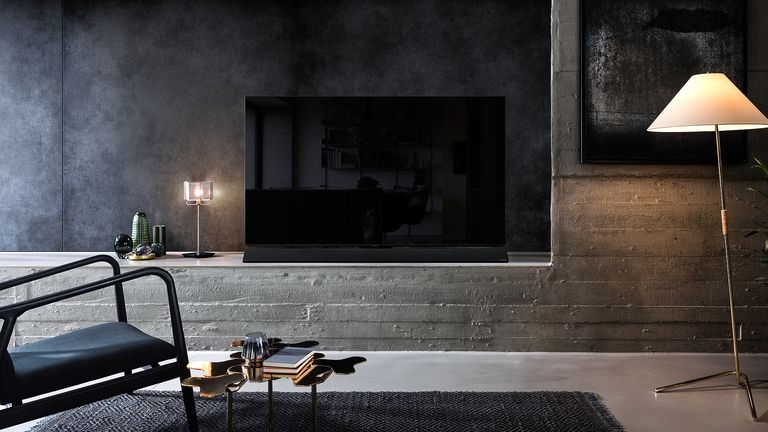 Thanks to careful tuning and Panasonic's technical brilliance, the FZ952 may well offer the best 4K HDR OLED picture yet. This luxe panel is flatscreen royalty and may tempt movie lovers in particular away from its similarly priced 4K OLED rivals, Sony's AF8 and LG's C8

Panasonic TX-55FZ952B, with an rrp of £2499 is the latest 4K OLED from the Japanese mega-brand. It's been tuned by some of Tinsel Town’s finest, and undoubtedly has big-screen appeal for movie lovers. Sure, you can watch Cash in the Attic on it, but it's not what it was born to do.

I'd say it's among the best OLED TVs ever made. For certain things perhaps the best. After this advert break, let's see if it's your perfect TV.

Panasonic rightly makes a big deal of its Hollywood connections. Not only does it have an R&D lab that’s just a stone’s throw from the Walk of Fame, but all its OLED screens have been fine tuned by Tinsel Town creatives.

Well Hollywood is nothing if not nice to look at, and build quality on the FZ952B is exceptional, with a slimline bezel and the best finishing this side of Harry Kane. Like the model it usurps, 2017’s EZ1002, it features a dedicated sound bar, dubbed the Dynamic Blade Speaker. As well as being tuned by Technics audio engineers, it's similarly sleek and sexy.

The FZ952 comes in just two sizes at present, but I wouldn’t rule out a 77-incher appearing before the end of the year. It’s currently available as the 55-inch TX-55FZ952B and 65-inch TX-65-FZ952B. In those lands deprived of Freeview Play, it's known as the FZ950. Size aside, the screens are essentially identical.

Major discounts might be unlikely for the time being but keep your eyes glued to our price 'widgets' and the best Black Friday deals.

If you’re watching HD channels via a Sky Q box, then that STB is already handling the upscale. However, the set does a great job with HD channels from its own Freeview Play tuner. In both cases, original HD material benefits from the improved pixel density the panel offers. Sky One’s DC super hero slate (The Flash, Arrow, Supergirl) looks particularly cinematic and glossy on this set. There’s no sense that you’re slumming it with sub-2160p fare.

Inevitably though, to see the FZ952 at its best, use a 4K HDR source such as UHD Blu-ray, Amazon Prime or Netflix.

However, with SDR content the THX Cinema mode, True Cinema and two Pro modes,  dramatically reduce panel luminance (down to as little as 30 per cent), and shouldn’t be used in anything other than full dark room conditions.

That's an important point about this TV. What you see on the FZ952's OLED panel looks the business… provided you choose the right image preset for what you're viewing.

The Normal mode is the best option for watching in rooms with average ambient light. Dynamic oversaturates colour, but with some content (animation for example), can look divine. When displaying 4K HDR content, all the set’s image presets lock to full panel luminance and contrast. Consequently, the difference between presets is less pronounced than with SDR, becoming more a matter of personal preference.

The lack of Dolby Vision is a debatable omission. Personally I’d like to see it on board, but I don’t consider its absence a deal breaker.

What's impossible to debate is that this is the best performing HDR set we’ve seen from Panasonic. I measured peak luminance around 750 cd/m2 (aka nits) using a 10 per cent HDR window, but reducing this to a smaller 5 per cent window saw HDR peaks jump to around 900 cd/m2. Given that most specular highlights are small, this set should easily cope with HDR material.

Just as importantly, its near black performance is phenomenal.

Motion handling is decent, too. IFC (Intelligent Frame Creation) continues to see improvement. Stick with IFC Min, which holds detail in fast moving sports but doesn’t penalise with motion artefact. Alternatively, use the Custom setting (with Blur on 8 and Smooth on 1), for a more filmic presentation.

There’s also a Black Frame insertion mode; this technically improves motion resolution, but is largely unwatchable, because it darkens the image and introduces intense flicker.

The FZ952 also makes for a superb gaming display. If you play in Normal mode, image lag is poor at 106ms. However, the dedicated Game mode improves response time to an outstanding 21ms.

Sound quality is excellent for a flatpanel TV. The Dynamic Blade Speaker uses four woofers, a quartet of mid-range drivers, two tweeters, and a quad passive radiator for deeper bass. Its stereo presentation is first class. Total power output is rated at 80W.

On the debit side, there’s no Dolby Atmos decoder, so you can’t route Dolby Atmos from either a connected set top box or the internal Netflix client, to an Atmos sound system. There’s a faux Cinema Sound Surround mode, but I wouldn’t advocate using it.

Panasonic’s My Home Screen smart OS (now up to v3), remains refreshingly lean. There have been some minor tweaks to usability, but it looks much the same, with a trio of buttons (Live TV, Apps and Devices) which provide menu shortcuts. You can customise these with additional services (BBC iPlayer for example) or inputs.

Catch-up TV support is extensive, with ITVHub, All4, My5, BBC News & Sport and UK Play joining iPlayer. The BBC app is compatible with Live 4K streams.  Other services include Netflix, Amazon Prime Video, YouTube and Rakuten TV. 4K and HDR are both supported.

Media playback is provided from USB sticks and over a network; the TV is DLNA compliant.

Connections include four HDMI inputs. While all are 4K HDCP enabled, only two are full bandwidth. That means you can’t run a 2160p 10-bit source into HDMIs 3 or 4.  There are three USB ports (one a fast v2.0), an SD card reader, component and phono stereo audio inputs, a digital optical audio output for external sound system use (unlikely to get much use, given the aforementioned Dynamic Blade speaker) and ethernet, to complement on-board Wi-Fi.

The TV comes with two remote controls. There’s a premium IR zapper, with a dedicated Netflix button, and a Bluetooth touch remote.

In many ways, the FZ952 is the best performing OLED screen I’ve seen this year. Its colour performance is extraordinary, while detail and HDR shine. It also boasts a superior sound solution and has a great smart platform.

Okay, the lack of Dolby Vision and Dolby Atmos support means it’s not a slam dunk against rival OLED panels such as LG's OLED C8 and the jaw-dropping Sony AF8.

But if you want a 4K TV to suck the finest possible detail out of movie classics from Casablanca to Ragnarok, the Panasonic FZ952 is like having your own personal screening room.