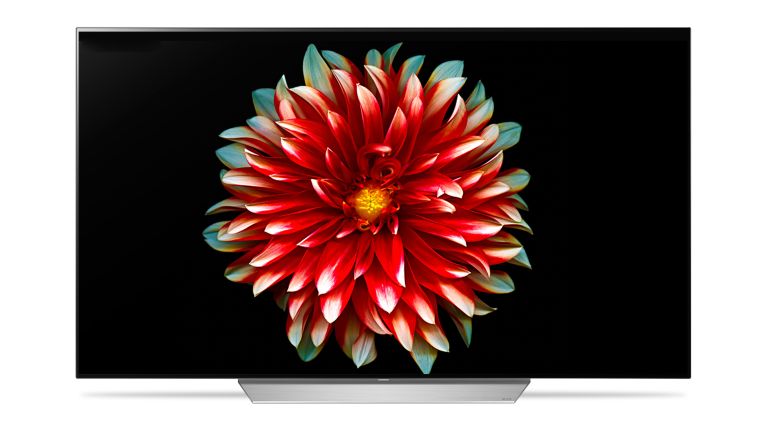 We all know OLED’s better than LCD, except in one crucial area: money. Until very recently a decent-sized OLED TV cost the kind of money you’d discuss in hushed whispers. Not any more: while the OLED C7 is still an expensive TV, it wasn't frighteningly so at launch, and now it's knocking on the door marked 'bargain'.

It delivers the stunning picture quality of OLED for a price akin to some brands’ top-end LCDs. The excellent WebOS is the icing on the cake of what is one of the best 55-inch TVs around.

It’s not quite as stunning as the same firm’s E7 and G7 range, but the OLED C7 is still a very beautiful piece of hardware. It’s incredibly thin bar a section at the bottom rear that accommodates the various connectors and the speakers, and the bezels are tiny. It looks superb even when it’s not switched on.

The stand is exceptionally heavy, and not something you'd want to drop on a foot or treasured vase.

This review is specifically about the LG OLED55C7 which is, obviously, the 55-inch version. The only other model in the range is the LG OLED65C7 which is 65 inches across and equally as good, if a tad pricier.

With standard dynamic range inputs, this is almost as good as it gets. The blacks are close to perfect, the backlight uniform, the shadows deep enough to fall into and the colours amazing. The HD upscaling now goes to 4K, with even better results than before. It’s not quite as impressive as Samsung’s upscaling or Sony’s, but LG is really closing the gap here.

But it’s the 4K HDR you’re really here for, and that shines on OLED. The C7 is great at rendering near-black shades but can also deliver the brightest whites alongside the deepest blacks, without any unwanted crossover. There’s only one exception: Dolby Vision. We found some scenes’ mix of bright and dark content turned into grey, something you’ll need to reduce the brightness by five or six notches to eliminate.

LG’s motion processing is still a little behind the rest of the pack, although it’s better than before, and it’s sometimes difficult to get the right balance between brightness and noise. For example the Standard preset is more satisfying than the Cinema one, but occasionally suffers from low-level noise in darker parts. Cinema doesn’t have the noise, but it’s not as involving either.

These are minor clouds in an otherwise crystal blue sky, though. The OLED C7 is a remarkable television, at least as far as the picture is concerned. Sound isn’t quite so good: while it promises Dolby Atmos there’s only so much you can do with integrated speakers. The speakers are fine, but they’re no match for the more expensive OLED55E7’s built-in soundbar.

You get four HDMI ports, all of which take full-bandwidth HDR as well as three USB ports, an Ethernet port and Wi-Fi.

LG’s lovely webOS, here in version 3.0 has Freeview Play included for easy viewing of what's on now and what's been on already via terrestrial catch-up.

Further apps include the obligatory Amazon and Netflix plus YouTube and NowTV. The OS isn’t significantly different to previous versions, and that’s fine: it’s slick, logical and doesn’t reduce us to angry swearing like some rival OSes do. The main addition is support for 360-degree videos you control with waves of the remote control.

The OLED55C7 delivers absolutely stunning picture quality, and for a lot less money than you'd have paid for OLED just a few years ago.

If you don’t mind the slightly dull sound, or are planning to add your own pick of the best soundbars or soundbases, this is an absolute bargain in OLED terms.