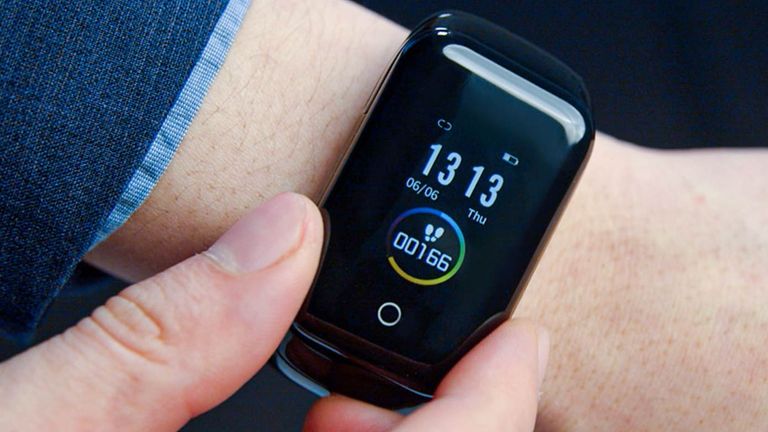 If you were already impressed by the compact case of Apple’s AirPods, then prepare to be amazed, because these wireless earphones fit inside a smartwatch.

Called the Wristbuds and currently crowd-funding on Indiegogo ahead of going into production, the display of the smartwatch flips open 90 degrees to reveal a pair of wireless earphones inside.

The smartwatch works like any other, acting as a fitness tracker to log your daily activity and exercise. It also plays music (to the included earphones naturally), and can handle incoming calls and notifications from your smartphone.

Its China-based manufacturer claims the watch can take blood pressure and heart rate measurements, as well as track walking, running, calories burned, and sleep. This data is sent to a companion app on your smartphone, which is available for iOS and Android.

The earphones slot inside the watch, where they can be fully charged in just 30 minutes, the manufacturer claims. The watch’s battery is large enough to refill the earphone batteries twice, before it also needs plugging in.

Inside, there is 4GB of storage for up to 1,000 songs, although to use the watch as an MP3 player you have to spend an extra $30 to unlock that feature.

As you might expect, there is a fairly large smartwatch. It measures 55x33mm and is 19.6mm thick, while weighing 47g (plus a further 6g for the pair of earphones). The watch features a 1.14-inch TFT touch screen with a resolution of 135 x 240. Battery life is a claimed four days with standard use.

According to the Indiegogo campaign, the Wristbuds will be ready for mass production in March, and begin shipping in April. They can be ordered now for £45 (approx. $60), which is a steep discount on the regular retail price of £115 (approx. $150).

However, this being an Indiegogo campaign which is yet to reach its funding target, we should add the usual caveat. Products featured on crowd-funding websites are not necessarily ready to enter mass production, and can face lengthy delays or even cancellations. Handing over your money should be seen as an investment in the company behind the product, rather than directly purchasing the product.