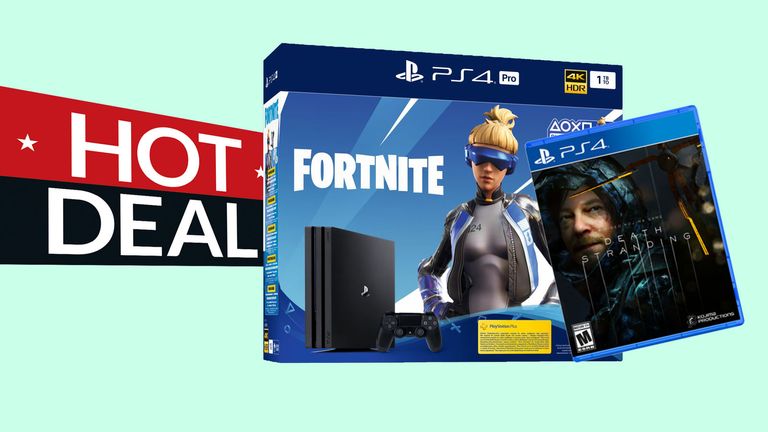 If you're not intending to pick up a PS5 at its launch this year, then you might have set your sights on a current-gen console. If so, Curry's has a very tidy deal going on, bundling two of the best games around with the PS4 Pro version of the console.

At present, the PS4 Pro is retailing at Curry's for £349.00. While a deal compiling the console with the ever-popular Fortnite – at the same price point – would be fantastic enough, this great bundle also includes Death Stranding, one of the best narrative single-player games in the PS4's history. Check out the £349.00 bundle deal below:

Fortnite + Neo pack + Death Stranding + PS4 Pro 1TB | now £349.00 at Curry's
This sweet PS4 Pro deal combines the 1TB console with Fortnite and the Neo pack, which itself delivers the epic Neo Versa outfit, Neo Phrenzy back bling and 2,000 V-Bucks to use and spend in game. For Fortnite fans who want to make the jump to PlayStation gaming, then this package is well worth a look, and the addition of Death Stranding means you have an engrossing single-player experience even when no-one's hanging around online. View Deal

Other Battle Royale games may have come before it, but Fortnite has become the shining example of the genre. Take people from all around the globe and throw them into a rapidly-shrinking interactive battlefield, in which players build fortifications, compete over resources and fight to be the last one left alive before the "storm" gets them. The game is hugely popular all over the world and highly addictive – to the chagrin of many parents.

Set in a post-apocalyptic United States, Death Stranding is Hideo Kojima's post-Metal Gear odyssey. Norman Reedus plays Sam Porter Bridges, a porter supplying cargo to various cities while navigating ravaged landscapes home to extra-terrestrial monsters from a place between life and death. It's a heavily involving, powerful game with amazing acting from an all-star cast including Reedus, Mads Mikkelson, Léa Seydoux and more. You have to play this game.

More a fan of spinning webs in colourful costumes? You can grab the same great deal with Marvel's Spider-Man in place of Death Stranding. These packages are perfect to kick-start a PlayStation 4 gaming collection as they deliver a brand new console and a selection of games to play for a very competitive entry point. A wide-selection of cheap PS4 games can then be accessed through Sony's best-in-class library of titles – perfect to unwind at the weekend.

Fortnite + Neo pack + Marvel's Spider-Man + PS4 Pro 1TB | now £349.00 at Curry's
For the same price, you can get the same fantastic bundle, swapping the grim Death Stranding for the considerably more upbeat Marvel's Spider-Man, another one of the best games of the year. Go bag a few more cheap PS4 games and this will be the ideal 4k console for those who don't want to pick up the PS5 at launch. View Deal