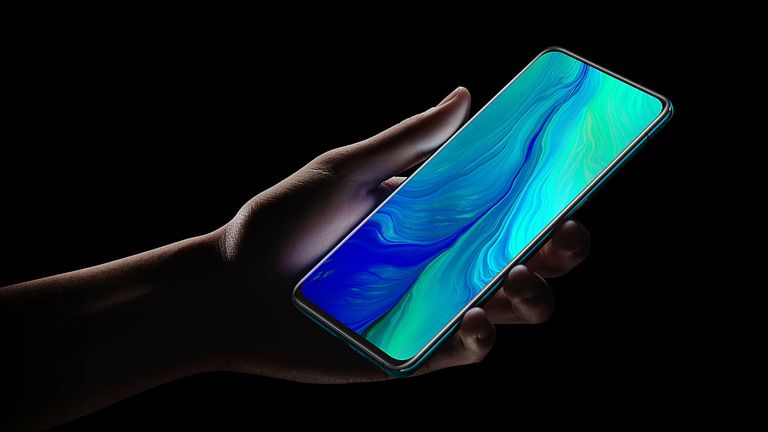 Oppo has taken the wraps off its all-new flagship Reno phone series at an event in Zurich today. Dubbed Reno, the new range is comprised of three handsets – Reno 5G, Reno 10x Zoom and Reno. All three ship in Ocean Green and Jet Black finishes.

As the (unimaginative) name suggests, the Reno 5G is the first 5G-enabled handset designed and launched worldwide by Oppo. The handset promises to take advantage of next-generation superfast networks when they roll-out later this year.

While all three variants in the line-up boast an edge-to-edge display (albeit of slightly different sizes) coupled with a jaunty pop-up selfie camera, only the Reno 10x Zoom and 5G variant boast the rear-mounted camera capable of 10x hybrid lossless zoom.

The latter was previewed at the MWC tradeshow earlier this year, with Oppo keeping quiet on whether we'd actually see the technology appear in a flagship handset. Well, wonder no more!

The camera system, which is comprised of a 48-megapixel primary shooter coupled with an 8-megapixel ultra-wide angle camera and 13-megapixel telephoto lens, uses all three cameras in tandem to squeeze as much detail as possible from each shot.

Oppo is using Optical Image Stabilisation (OIS) to remove any blurring from handshakes, which is absolutely necessary when you're dealing with this level of zoom. The Reno series clearly has its sights set on the Huawei P30 Pro, which was unveiled earlier this year and builds on the 3x lossless optical zoom pioneered by its predecessor with a 5x lossless optical zoom and 10x hybrid zoom.

Like the Oppo Reno, the latter uses software and AI to enhance some of the rough edges to improve the quality of the finished photograph. Unlike the Huawei P30 Pro, which allows users to hit 50x digital zoom – albeit at a reduced quality to the 10x lossless hybrid zoom feature, Oppo doesn't hit quite the same heights.

Another new feature headed to the impressive rear-mounted camera is Ultra Night Mode 2.0. Like the Night Sight feature on Google Pixel 3, and upcoming dedicated Night mode coming to Samsung Galaxy S10 in the near future.

The Oppo Reno series leverages AI, HDR, and multi-frame noise reduction to reduce any noise in the image shot in tough, low-light conditions. Oppo says its highlight suppression and dynamic range "enable users to achieve the level of brightness and details that normally exceed the limits of human eyes".

Oppo has incorporated facial recognition into the feature to ensure the subjects of your images are prioritised when it comes to saving details from the shadows.

When you take a night portrait, the rear-mounted camera automatically finds the human faces, and offers "special protection for the portrait", Oppo says. The sample images shown on-stage look pretty impressive, but we'll need to put this new feature through its paces before we decide whether it actually lives up to these claims.

All three models in the Oppo Reno series support shooting 4K Ultra HD footage up to 60 frames-per-second, using OIS to ensure stable video. Oppo has fitted the handset with multiple microphones to record 360° of the ambient sound, so that it can be cancelled out. Presumably, this also works during phone calls on windy days.

Despite all of the camera technology crammed into this handset, the Oppo Reno doesn't have a camera bump on the back. That's somewhat of a rarity these days.

Interesting, Oppo has fitted a small nubbin just below the rear-mounted camera set-up, which its marketing department refers to as a "ceramic O-dot gem", which lifts up the camera from the surface it's resting on – stopping the lens getting scratched or scuffed, no matter how carelessly you thrown the handset down. It's a really great idea, although we'll need to do some thorough testing to see just how effective it is at saving your fancy new 10x Zoom camera from getting ruined.

Reno 5G and Reno 10x Zoom have a 6.6-inch edge-to-edge OLED display that fills every corner on the front of the handset. The screen has a 2,340x1,080 pixel resolution, with an aspect ratio of 19.5:9. Meanwhile, the plain ol' Reno sports a smaller 6.4-inch OLED panel on the front, albeit with the same all-screen design.

The display on the Oppo Reno is DCI-P3 compliant, too. So amateur photographers will be able to properly assess their family snaps on the screen.

Banishing the selfie camera to a pop-up drawer at the top of the handset has enabled Oppo to achieve a jaw-dropping 93.1% screen-to-body ratio, with not a single notch or hole-punch in sight.

Speaking of the camera, Oppo says it can emerge from the chassis in 0.8 seconds, which means it shouldn't hold up your selfies – something your mum and the rest of your Instagram followers will undoubtedly be glad to hear. If you're worried about the durability of the camera drawer, Oppo says that its mechanised pop-up should be good for 200,000 open and closes. That means you'll be able to take 100 selfies a day for five years before you run into any trouble.

The pop-up front-facing camera has a jaunty design that appears at a 11-degree angle from the phone. In our eyes, it makes the flagship smartphone resemble one of those Dynamo lights – although we wouldn't recommend jamming down the selfie camera in the hope of recharging your battery.

Oppo is using Gorilla Glass 6 on the front of the handset to keep that impressive edge-to-edge screen protected from drops and dings. If you're wondering where the fingerprint scanner is hiding, you'll find it embedded beneath the screen itself. Oppo says its 30% faster than its previous generation sensor.

Reno, Reno 5G, and Reno 10x Zoom boast stereo speakers combined with Dolby Atmos to improve video playback on-the-go, if you like to binge boxsets on your morning commute. All three handsets are powered by the flagship Qualcomm Snapdragon 855 – the standard for any high-end Android handset. This is combined with either 6GB or 8GB of RAM, depending on which model you opt for. Oppo offers either 128GB or 256GB of built-in storage. There's no expandable storage, so you'd better make sure you're happy with whatever configuration you plump for.

Under the bonnet of the Reno 5G and Reno 10x Zoom, you'll find a 4,065mAh battery cell – that's the heftiest battery you'll find in any Oppo smartphone on the market, and we'd expect to get a full day of use out of the new Reno range. When your handset does run out of juice, Oppo has fitted the Reno range with its so-called Flash Charge 3.0 technology. The pain ol' Reno has a smaller 3,765mAh battery cell.

The Oppo Reno series is powered by ColorOS 6 – a custom skin applied to Android 9.0 Pie that includes a lot more white space than earlier iterations. It's pretty colourful, and not as garish as some of its rivals (here's looking at you, Huawei).

As you'd expect from any Android Pie handset, there's a new intelligent battery management system that throttles apps that haven’t been used in a while to try and eke out as much battery life as possible. Oppo will also swap battery longevity in favour of raw power in the new Frame Boost mode, that ensures you won't see dropped frames – no matter how many characters are battling on-screen.

According to Oppo, "the Frame Boost system can analyse the status of mobile performance in real-time while gaming. When lag is predicted, frame rate and stability will be adjusted to prioritise a first-class gaming experience."

Sounds impressive, right? We'll have to test this thoroughly, but it sounds like this could be a real contender for those who want to hammer the likes of PUBG on their smartphone day-in, day-out.

Speaking about the launch, Oppo President of International Business, Alen Wu said: "Reno will serve as the catalyst for the future of OPPO’s smartphone development, and also as an integral part of our global growth strategy for the OPPO brand."

Like the vast majority of the recently-announced 5G handsets, the Oppo Reno 5G will run exclusively on EE in the UK. As for when you can get your hands on the Reno 5G, Oppo said it'll be available in the UK "this summer".

Oppo has announced European pricing at its Zurich launch event. Oppo Reno starts from €499 (£430 converted), Reno 10x Zoom costs €799 (£690 converted), and the 5G-compatible Reno variant will set you back €899 (£790 converted). Whether Oppo converts these prices to their equivalent, or simply swaps the € for a £ and keep the numerical value identical – as many handset manufactures do – remains to be seen.

Sharon Meadows, Director of Devices for EE, said: "EE Customers with an OPPO Reno 5G will be able to get the most from our new super-fast, high capacity 5G network. Whether they are watching 4K content, trying out AR experiences or gaming with their friends, the Reno 5G will let them tap into the game-changing speeds and connectivity that 5G will bring."

EE is switching on 5G in 16 UK cities in 2019. The first launch cities will be the UK’s four capital cities – London, Cardiff, Edinburgh and Belfast – as well as Birmingham and Manchester. After EE flicks the switch on its launch cities, the carrier will add a number of other locations through 2019, including Glasgow, Newcastle, Liverpool, Leeds, Hull, Sheffield, Nottingham, Leicester, Coventry and Bristol.