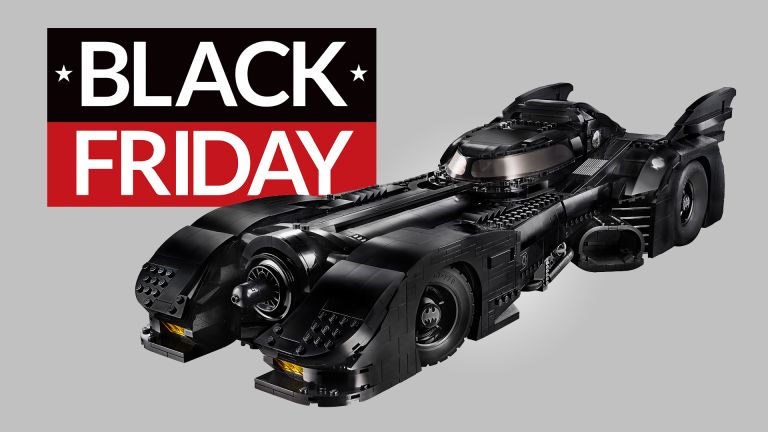 Not content with just releasing Lego Black Friday deals today, Lego is also celebrating the 30th anniversary of Tim Burton's Batman with an incredible collector's-edition set of the best Batmobile ever to appear on film, which went on-sale today for the first time!

Clocking in at over 3,300 pieces, and 60cm long when fully built, this thing is a genuine stunner – and it comes with a rotating display stand, so you'll get to inspect it from every angle.

The cockpit slides open to reveal a detailed recreation of the interior, and you can rotate the turbine at the front to make two machine guns pop up from the long, long bonnet. It also comes with new minifigs of Batman, Joker and Vicki Vale, in movie-appropriate outfits, plus a display stand for them.

1989 Lego Batmobile | £219.99/$249.99
It launches November 29th, but you can add it to your wishlist now at Lego's official store online. 3,306 pieces, custom details, special minifigs, and an amazing collector's piece – forget the Black Friday deals, this is where all your money's going…View Deal

If the Batmobile doesn't float your Batboat, here are more of today's Amazon Lego Black Friday deals that run out at 11.59pm tonight, November 29th.

Lego Technic Bugatti Chiron | | Now £174.99
One of Lego's coolest sets of the last few years is this incredibly detailed Bugatti Chiron, which includes a working eight-speed gearbox, steering, a moving W16 engine, detailed interior, and spoiler that raises and lowers. It was awesome at full price, and at 47% off, it's just astounding. Do not miss out – this offer ends at 11.59pm on Friday 29 November.View Deal

Lego Hidden Side Haunted High School | | Now £61.99
Lego's Hidden Side sets mix augmented-reality play with traditional Lego sets. The 'Hidden' aspect goes double: first, this school playset transforms, folding and opening into a great monster. But also, you can play a game on your phone while pointing the camera at the set, which tasks you with hunting ghosts and physically interacting with the school to change things in the game. It's a very cool set in the first place, and has this great extra experience to it once built. This offer ends at 11.59pm on Friday 29 November.View Deal

Lego Creator Pirate Roller Coaster | RRP £59.99 | Now £41.99
One of our favourite Lego sets – it's such a cool build for the price! It's a Creator 3-in-1 set, so there are three different theme-park rides to build, but we'd recommend it even if it was just the main one: it's such a cool, evocatively themed, working pirate coaster. This offer ends at 11.59pm on Friday 29 November.View Deal

Lego City Downtown Fire Brigade | RRP £89.99 | Now £51.99
Lego fire engine sets never go out of style, and we love what a comprehensive playset this is. You've got a proper-sized building to save from a raging fire, a swivelling crane, a falling lampost, a load of minifigures and accessories, and (most importantly) four different fire and rescue vehicles. Kids can create so much peril and heroism from this one set, and it's an amazing price today. This offer ends at 11.59pm on Friday 29 November.View Deal

Lego Technic Tracked Loader 2-in-1 | RRP £54.99 | Now £32.99
Build yourself a working loader vehicle with rotating cab, working boom and claw, two-speed winch and moving tracks… or create a tracked dumper truck from the same piece. It's a great bit of Technic mechanics in either form. This offer ends at 11.59pm on Friday 29 November.View Deal

Lego Star Wars Droid Gunship | RRP £54.99 | Now £35.99
Battle for the home of the Wookiees with this detailed vehicle, which includes two droid figures, plus Yoda and Wookiee chief Tarffull. The droid ship fires stud missiles, and is great to mix with other Star Wars sets for big battles. This offer ends at 11.59pm on Friday 29 November.View Deal