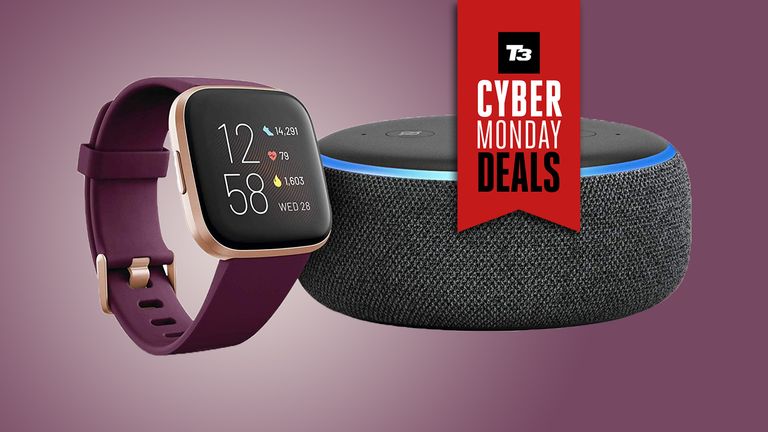 There is already a very decent list of Fitbit deals live on Amazon but here is another one for you: get the all-new Fitbit Versa 2 smartwatch bundled up with the Amazon Echo Dot smart speaker for £179.99. Even without the Echo Dot, it would be a decent deal but this Cyber Monday bundle deal makes it pretty much unmissable. Get it while you can!

Check out the best Cyber Monday deals over at our hub where we collect all the best deals from the biggest retailers on the internet, let it be mattress or makeup deals, you'll find them here on T3.

Fitbit Versa 2 Smartwatch + Amazon Echo Dot (3rd Gen) | Cyber Monday price £179.99 | RRP £249.99 | Save £70 (28%) on Amazon
Alexa, meet Alexa: whether you want to have a chat with your wrist using the built-in smart assistant in the Fitbit Versa 2 or want to instruct your Echo Dot to turn on the Philips Hue lights in your kitchen, you can do it both with the devices included in this bundle. The Fitbit Versa 2 is the most sought-after wearable at the moment and even without the Echo Dot bundle, this would be a good deal. Don't miss out, offer ends midnight 2 December 2019!View Deal

Should you buy the Fitbit Versa 2 with Amazon Echo Dot bundle?

The Fitbit Versa 2 brought even more smart functionality to the table with the built-in Alexa smart assistant. With Alexa, you can get quick news, info and weather, set bedtime reminders and alarms, control your smart home devices and more-just by speaking to your smartwatch.

The Fitbit Versa 2 also does all what you'd expect from a decent fitness smartwatch, so it racks your activity all day, monitors sleep, has a 24/7 heart rate monitor and on board memory for music, too.

The Echo Dot is Amazon's most popular smart speaker, the thirds generation delivering bigger and better sound than before. The Echo Dot features the same Alexa assistant as the Versa 2, for added convenience.

You can also call almost anyone hands free including UK mobile and residential numbers (from UK only), other Echo devices, Alexa app and Skype. Link your Vodafone account to make and receive mobile calls. Instantly drop in on other rooms in your home or make an announcement to every room with a compatible Echo device.

Liked this? Check out some of our favourite deals currently live this Cyber Monday: