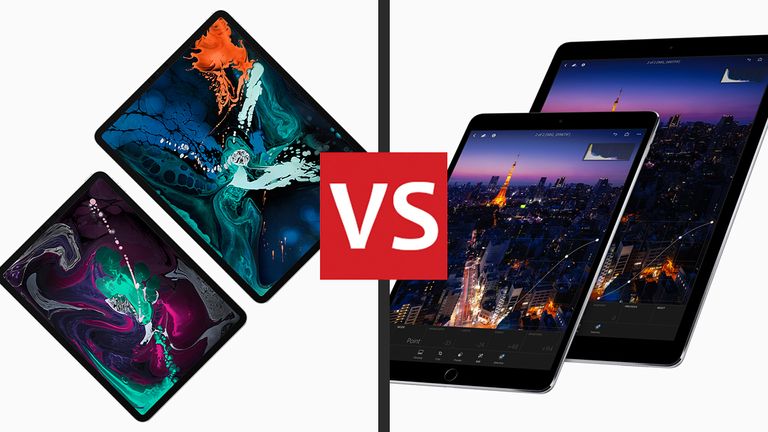 Well, we're here to help – we'll guide you through the differences between the 2017 iPad Pros and the 2018 iPad Pros, so you know whether the upgrade is worth it. Read on for a detailed breakdown of the specs, features, software and prices of Apple's recent tablets.

This is a big one, because between 2017 and 2018 the iPads ditched the home button and abandoned Touch ID in favour of Face ID. The new iPads are also flatter, without the slightly sloping backs, and have rounded screen corners together with slimmer bezels. For our money the new 2018 iPad Pro design is better than the 2017 iPad Pro one, though your particular tastes may differ.

The 2018 iPad Pros do have slightly larger rear camera lenses, and more obvious antenna lines, but they're only available in silver and space grey. If you're shopping for a 2017 iPad Pro you can pick from silver, space grey, gold and rose gold, which might be one reason why you would prefer the older model over the newer one.

When it comes to specs, as you would expect, the newer 2018 iPad Pros have the faster A12X Bionic chip with a built-in neural engine for AI-assisted calculations (think augmented reality and voice detection). According to Apple, that makes them 35 percent faster than the 2017 iPad Pros (which feature an A10X Fusion chip) for single-core tasks and up to 90 percent faster on multi-core tasks.

The 2018 iPad Pros are fitted with either 4GB or 6GB of RAM, depending on which configuration you go for, while all the 2017 iPad Pro models stick with 4GB. Storage-wise, all these tablets are available with 64GB, 256GB or 512GB of internal storage on board, but only the 2018 iPad Pros offer an even higher 1TB level.

All these iPad Pros (from both 2017 and 2018) are available in Wi-Fi only or cellular and Wi-Fi versions, so you can pay extra if you need 4G connectivity on the go. All these tablets have a 12MP camera on the rear and a 7MP camera on the front, though the selfie cam on the newer models works with Face ID and offers more advanced effects (like portrait lighting and Memoji support).

In terms of features, the 2018 iPad Pros and the 2017 iPad Pros are closer than you might think – they all run the same iOS 12 software, after all, which means you get the same built-in functionality and the same choice of apps across the board (even if everything on a newer iPad Pro might run a little faster than on an older iPad Pro).

Both the 2018 iPad Pros and the 2017 iPad Pros support keyboard attachments and the Apple Pencil – though you need a different Apple Pencil depending on the year of the iPad Pro. The newer 2018 Apple Pencil is a much more appealing proposition, with wireless magnetic charging and the way it just clips to the side of the iPad Pro rather than having to be plugged awkwardly into a port.

Speaking of ports, the 2018 iPad Pros make the switch to USB-C rather than Lightning. If you've got a lot of Lightning-compatible equipment around you might be better off with the older model, though adapters are available. The new USB-C port on the 2018 iPad Pros can mirror the display to a compatible keyboard and read photos from a memory card, but you can't plug any USB-C device in there (external hard drives won't work).

Most of the time you're going to want to pick a 2018 iPad Pro over a 2017 iPad Pro, unless you need a gold colour, or you're on a budget, or you have a lot of Lightning port accessories. The newer models are faster, and better designed, and are likely to define the iPad for the foreseeable future – the extra expense is worth it.

Whether it's worth upgrading if you already have a 2017 iPad Pro, that's a harder question to answer. In terms of performance and features, it probably isn't – remember tablets from both years run iOS 12 and all the same apps – but if you really like the new design or the new Apple Pencil and keyboard accessories, you might consider splashing out.

The new iPad Pros launched in 2018 feel like a watershed moment for the iPad, just as the iPhone X was for the iPhone – the new design, the adoption of Face ID, the improved accessories... they're significantly superior than what went before. If you really can't decide between the 2018 iPad Pros and the 2017 iPad Pros, you could always wait and see what 2019 is going to have in store.