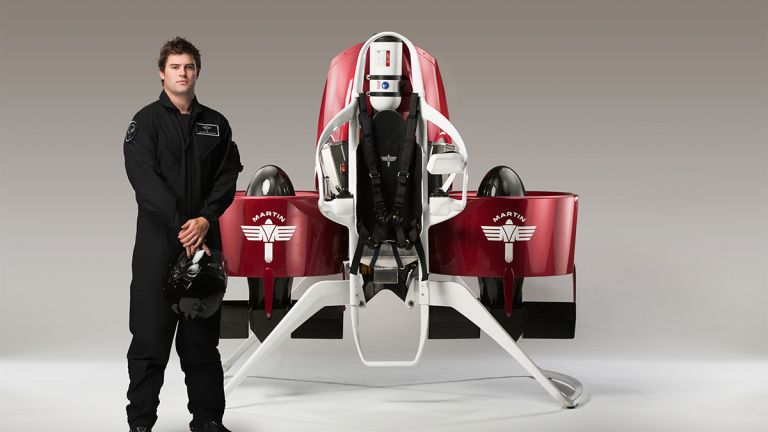 If you're ready for the future and happen to have a large wad of cash to spare, you'll be pleased to know you'll be able to buy your very own jetpack from Martin Aircraft during the second half of 2016. The company has announced that its first product will go on sale for $150,000 (around £95,000 at today's rates).

Nearly four decades in the making, the jetpack contraption offers a maximum flight time of 30 minutes and a top speed of just over 45mph. It can reach altitudes of up to 1,000 metres (about 3,000 feet), the company says.

"The Martin Jetpack is a disruptive technology, much like the helicopter was when first developed, with substantial capabilities, and is able to be flown by a pilot or via remote control," says Martin Aircraft. "The jetpack can take off and land vertically (VTOL) and because of its small dimensions, it can operate in confined spaces such as close to or between buildings, near trees or in confined areas that other VTOL aircraft such as helicopters cannot access."

Of course just how readily you'll be able to blast your way across the neighbours' gardens depends on local flight regulations, but it's another significant milestone in the development of the transportation systems of the future. Its makers expect it to find uses in all kinds of situations, including search and rescue.

The V4 2.0L engine on board the jetpack drives two ducted fans to provide lift, and it runs on regular petrol. The main chassis is made from carbon fibre and aluminium. If you're planning to take a trip to the skies, you'll be relieved to know there's also a parachute built-in for emergencies.