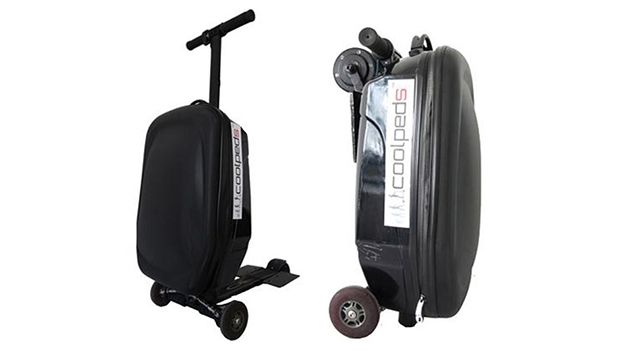 Let's face it. Getting around with the suitcase can be a real pain in the backside – especially when you've stuffed as much into it as the airline will allow.

So when we saw that somebody had invented a suitcase with a built in electric scooter, you can understand how excited we got. Oh, and this isn't the concept; it's a real product that you can go out and buy today.

The Coolpeds suitcase/electric scooter can whisk you around the airport at a spritely 12.4 mph. It has a maximum range of 6 miles on a single charge of its lithium ion battery – which should be more than enough to get you around the average airport (unless you're in a mammoth one like Dubai's Terminal 3, in which case, you're screwed).

What's even better is that it is a standard carry on size, meaning you will have to check in as soon as you get to the airport (because let's face it, that would defeat the purpose).

It is a bit heavy though. At 7.9kg, you'll need to make sure that the airliner you're flying with doesn't have a weight restriction for hand luggage. That said, you could just as easily uses for scooting around the local train station (though check first if it's allowed, obviously).

The regular version will set you back $599 (that's £389 in the Queen's money). You can also buy a model fitted with solar panels which cost $100 more.