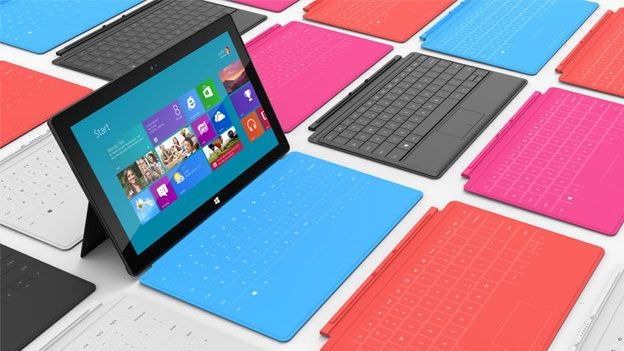 Bringing the tablet wars to Apple, Microsoft has unveiled the 10.6-inch Microsoft Surface, a Windows 8 tablet that hosts an Intel CPU and 1080p display

Microsoft has ended a series of rumours, officially unveiling its first iPad rivalling tablet device during last night's LA-based launch event in the form of the 10.6-inch Microsoft Surface.

With two devices confirmed as heading to market, Microsoft will pair a 9.3mm thick Windows RT powered machine with the headline grabbing Windows 8 offering, a device which lines up at a rather beefy 13.5mm thick and which will play host to an Intel CPU.

"Much like Windows 1 needed the mouse, we wanted to give Windows 8 it's own hardware," said Microsoft CEO Steve Ballmer. "This combination of hardware and software works together to deliver an amazing experience."

Measuring in at 10.6-inches in size and featuring a rugged Gorilla Glass 2 display, the Microsoft Surface is an effort to expand the possibilities of the tablet scene bringing a higher level of usability and business centric functions to the portable devices.

Describing the Windows 8 Surface tablet as a “full PC,” Microsoft has paired its Pro model iPad competitor with an impressive 1920 x 1080p Full HD ClearType screen with the metal backed tablet playing host to a full size USB 3.0 connector and the option of 64GB or 128GB storage capacities.

With an 862g heft the Windows 8 Surface tablet is far from the lightest option on the market with Microsoft looking to further plump its business credentials with a number of full QWERTY keyboard and trackpad toting cases connecting to the device in Apple Smartcover-esque magnetic fashion.

For those not wanting to plump for an additional case, the tablet features on inbuilt kickstand to aid in media playback with the sleekly finished tablet sporting a bevelled edge for a more ergonomic feel in the hand.

Despite taking the opportunity to officially showcase the upcoming Windows 8 powered Samsung Galaxy Tab 10.1 rival, Redmond based Microsoft has yet to announce any confirmed release date plans or a Microsoft Surface UK price.

Speaking with the BBC Research Vice President with analyst firm Gartner, Carolina Milanesi, has suggested Microsoft will be able to reduce its cost on getting the Surface to market by avoiding its own licensing fees for the Windows 8 software.

"Microsoft can offer a competitive price for these specifications as it doesn't need to pay itself a licence for the Windows 8 software which other manufacturers will have to do, and that might make its PC and tablet-making partners unhappy," she said.

Are you impressed with Microsoft's attempts to bring the tablet fight to Apple or do you see the Windows 8 machine as too little, too late for the software giant? Let us know via the T3 Twitter and Facebook feeds.