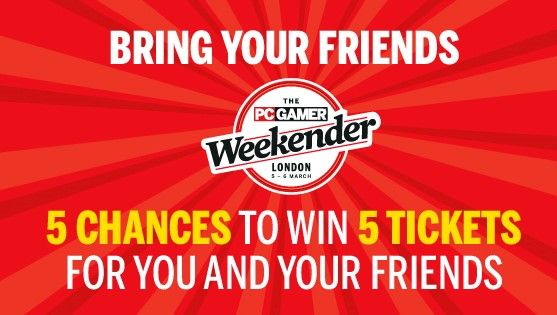 The awesome new PC Gamer Weekender takes place on 5-6 March in East London - and you could win five tickets for you and your mates to be there. Just enter our compeition below. The event is dedicated to PC gaming, packed with socials, competitions, tournaments and gaming heroes.

The UK's largest PC gaming floor will give you first play on the latest triple A and indie games, many pre-release and exclusive. There'll also be plenty of competitive gaming and stages hosted with dev interviews and reveals. So far it's been announced that Dark Souls 3, Total War: Warhammer, Street Fighter 5 and Umbrella Corps will be available on the show floor.

Even more games will be there:

The competition is open until midnight on Sunday 14 February. You can buy PC Gamer Weekender tickets here.

Oh, and don't forget to check out our guide to the best gaming PCs.