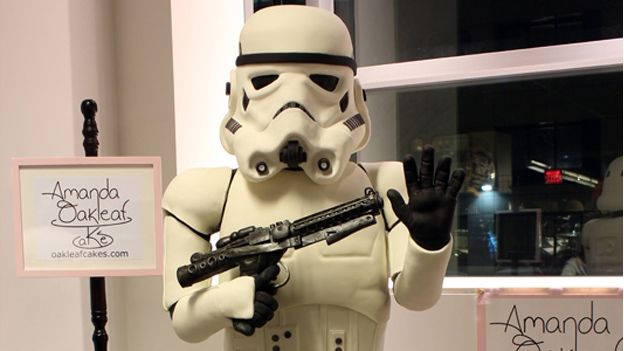 The world of technology can be pretty bizarre sometimes, so here's this week's round up of some of our favourite wacky and wonderful stories

If you like crazy Japanese robotics, miniatures and more Star Wars memorabilia than you can shake a pair of lightsaber chopsticks at, then it's your lucky day...

Robot baby
Looking a bit like an Ewok hot water bottle, the Babyloid was designed by Masayoshi Kano to comfort depressed elderly citizens by acting just like a real baby. Based on the idea that people can find joy in caring for a living thing, it coos, sheds LED tears and can be rocked to sleep like a good baby. This one definitely leans on the weirder side of weird.

Minecraft Lego Sets
Have you ever yearned for the freedom to make your subtly crafted replica of the Enterprise a reality? How about a scale reality? If this sounds at all appealing, you're in luck. Lego has enthusiastically announced, following an inspired suggestion on the Lego CUUSOO community project, that a Lego Minecraft set will be released soon. We might suggest a project ourselves... Look out in the future for Lego iPhone cases.

Star Wars Scalextrics
Recreate your geekhood dreams of helping Skywalker take down the Imperial's Death Star over and over again with the 1:64 scale slot car set, proton torpedos and sound effects not included. Or would you rather pit your trigger finger against the Imperials in a race through the forests of Endor in 1:32 scale? There's no sign of a pod racing version, but you probably cringed at that reference to the prequels anyway, right?

Use the Forks!
A ten-strong team of Imperial cakemakers lead by Tiler and Amanda Oakleaf took the most recent Arisia Convention by storm last week with full-size Stormtrooper cake. They served it up for free to hundreds of gleeful nerds despite the fact that it cost 9,000 standard Galactic Credits to buy and bake up 208 Endorian chicken eggs, 63kg of Yyegar Sugar and 34kg of Imperial Marshmallows. We're very excited about the possibility of cutting up a delicious slice of a Princess Layer cake in the future, or perhaps some Obi-Wan Cannoli. Jabba Cakes, anyone?

Miniature Canon USB Flash Drive
With this perfectly miniaturised Canon 5D and the right taste in women, tuxedos and cars, you could easily pretend to be a secret agent taking photographs of your work mates in compromising positions. It might not actually take any photographs, but with 4GB of storage space you could certainly fit plenty on there and just tell everyone it does.

Skyrim Quest Markers
If your habits from Bethesda's Elder Scrolls V: Skyrim are already spilling out into reality, then you might have to start pinching yourself more regularly because Etsy seller hollygreencraft constructs and sells Perler bead versions of the Skyrim quest icons. They can be stuck anywhere around the house to freak out other Skyrim fans or as handy reminders to finish washing the dishes or use the bathroom.

In keeping with the Sci-fi theme we can now present to you the Volkswagen Game Day trailer...