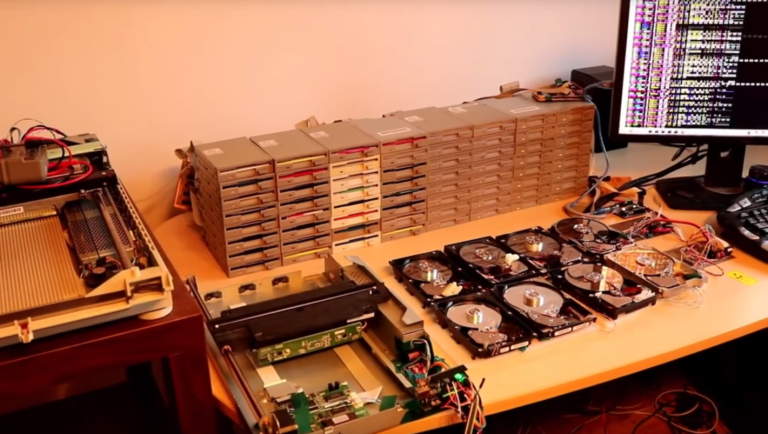 Nirvana's first single from their iconic 1991 LP 'Nevermind' is easily one of the most covered songs in music history. But we bet there's one version you haven't heard of yet - one that turns floppy disk drives, hard drives and old office equipment into a DIY electronic orchestra.

The cover is the brainchild of Polish YouTuber Paweł Zadrożniak and his amazing The Floppatron video series. The technical genius covers the grunge classic by hooking up 64 floppy drives, eight hard disk drives and two scanners to create a percussion/electro mashup that's easily going to be the best thing you'll hear all day.

So how does it all work? "The principle is simple," explains Zadrożniak. "Every device with an electric motor is able to generate a sound. Scanners and floppy drives use stepper motors to move the head with sensors which scans the image or performs read/write operations on a magnetic disk. The sound generated by a motor depends on driving speed. The higher the frequency, the greater the pitch. Hard disks use a magnet and a coil to tilt the head. When voltage is supplied for long enough, the head speeds up and hits the bound making the 'drum hit' sound."

The song itself was broken down into code using the programming language Python 2.7, with an SPI interface used to connect everything together. "It can also be driven by anything else like Raspberry Pi, Android smartphone (with USB-UART or UART-over-Bluetooth adapter) or another microcontroller," adds Zadrożniak.

The clever YouTuber, who has already posted similar covers of 'The Imperial March' from the Star Wars saga and, bizarrely, the theme tune from Hawaii Five-O, wrote the code for the song while bored during lectures at university and even used partially generated 'song script' by porting sections of the track in MIDI form.

Zadrożniak confirms the setup can even be powered by Raspberry Pi, a smartphone (with USB-UART or UART-over-Bluetooth adapter) or via another microcontroller. We imagine we'll be seeing this on a future episode of The Big Bang Theory in no time.

Why not check out: The smart robots about to invade your home