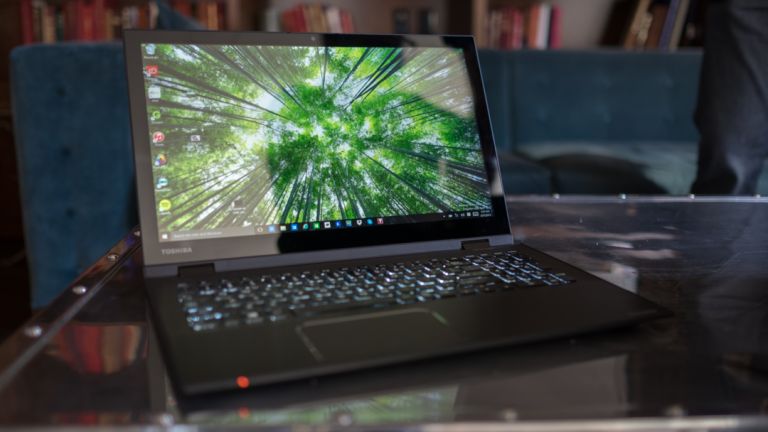 While there aren't too many convertible 15-inch laptops with 4K displays out there, prospective buyers have one more to choose from in the form of Toshiba's new Satellite Radius 15.

A refresh of last year's Satellite Radius, it's an all-round swankier affair having ditched that model's plastic exterior for a more premium-looking aluminium frame.

The biggest upgrade is the 15.6-inch IPS touchscreen, which has a pixel-resolution of 3,840 x 2,160, resulting in 282 pixels per inch. Toshiba is also offering the machine with a Full-HD display.

Hard drive options include a 256GB SSD, 1GB SSHD or 2TB HDD, and it can be configured with an Intel Broadwell CPU or AMD APU. In terms of storage options, the Satellite Radius 15 can be equipped with a 750GB hard drive or a 512GB SSD, and up to 12GB of RAM.

A trend started by Lenovo's Yoga 2-in-1 convertibles, the Satellite Radius 15 can be flipped into five viewing modes - Laptop, Tablet, Tabletop, Presentation and Audience - depending on how you want to interact with its screen's contents.

Launching in the third quarter of the year with Windows 8.1, the Satellite Radius 15 is Windows 10-ready thanks to a keyboard shortcut to Cortana and dual-mics designed for clear voice capture. Pricing starts at £599 for the Full HD version.

The Satellite Radius 15 is joined by new models in Toshiba's C, L, P and S series of laptops. The new Satellite C40-C is a budget-conscious notebook with a 32GB SSD and Intel Celeron CPU, while those in Toshiba's new L-series range tout impressive audio performance thanks to Skullcandy and DTS sound.

Toshiba's new S-series laptops focus on gaming performance, in addition to media and multi-tasking. If you're only interested in gaming, its new P-series notebooks can be configured with up to an Nvidia GeForce GTX 950M for gaming on the go. All systems are set to launch in the third quarter of 2015.