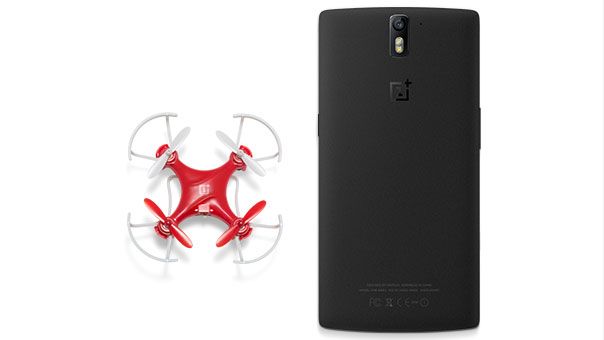 What happens when an April Fool goes to far? The company actually ends up making the product and putting it on sale. Say hello to the OnePlus DR-1.

That's right, OnePlus said it had so much fun inventing its April Fools' Day surprise that is got totally carried away and actually made the thing and put it on sale. Those crazy guys.

That thing is the OnePlus DR-1, the world's smallest remote controlled drone, measuring a dinky 70mm across and weighing just 12.5g.

Able to fit in the palm of your hand it'll take to the air for five to eight minutes on a single charge - probably just enough time to fly it round the office before it zooms towards the charger for a 20 minute juicing session.

If you fancy getting you hands on the tiny quadcopter you'll have to be quick as it's only a limited edition run - and it'll set you back £15.99.

There are plenty of drones on the market, although none are as affordable, or small, as this OnePlus offering. Here's a quick look at some of the best drones around.

At £430 the BeBop isn't totally unreasonable, but it still packs a HD camera with fisheye lens and can be controlled from your Android or iOS tablet.

It also sports an accelerometer, gyroscope, magnetometer and ultrasound to help keep it steady in flight.

With the free app on your tablet the BeBop has a range of 300 minutes, but shell out another £340 for the Skycontroller and you can extend that to a massive 2km.

There are four base models in the Spy Hero range – Spy, Spyder, Spyder 6 and Little Spyder – and each one can be upgraded at will.

You might start with a basic Spy model and decide later that you'd like a bigger footprint and perhaps have it take a heavier payload. No problem, just order some longer carbon fibre arms, more powerful motors and a few extra components.

The range starts at £325 and prices are rocket up depending on the configurations you choose.

The Husban X4 won't break the bank at £80 and its diminutive size (just 70mm x 70mm) will give the OnePlus DR-1 a run for its tiny sized money.

You do get a camera on the X4, although it's only 0.3MP and you can't monitor while you're in the air. You'll have to wait until its landed and slip the microSD card into a computer.