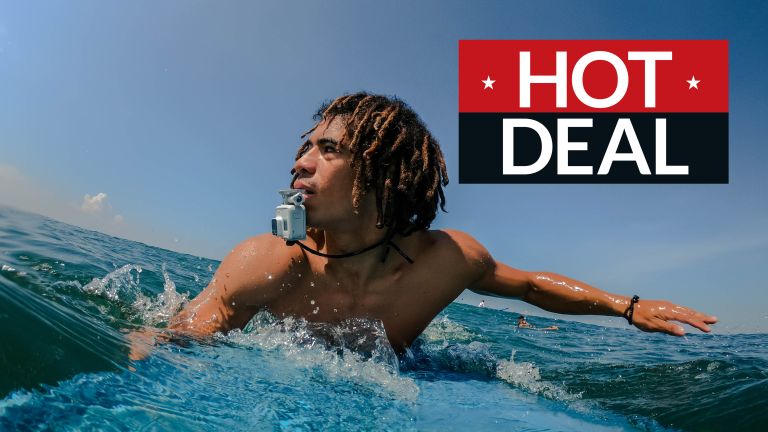 A week ago, we brought you the news that Currys is selling the top-of-the-range GoPro Hero7 Black for £349 and throwing in a free Travel Accessory Kit. That's a saving of £54.99 when compared with the separate selling price £403.99.

Well, that rather sweet deal is still live, so we're flagging it up again in case you want to get in on this particular deals train before it rolls out of town. Miss this GoPro deal and you might have to wait four months for the Black Friday sales to see one like it again.

The Hero7 lineup of GoPro action cameras consists of the top-end Hero7 Black, the mid-range Hero7 Silver, and the cheapest entry level model the Hero7 White.

The Hero7 Black shoots 4K video at 60fps or 12MP stills and features GoPro’s HyperSmooth tech – exclusive to the Black model – to stabilise your images. The camera also features improved three-mic audio capture, voice control, an intuitive user-interface and two-inch touchscreen, resulting in a supremely versatile action cam to capture your next adventure.

We gave the Hero7 Black a full five stars in our GoPro Hero7 Black review, so it's safe to say we really like it.

With this Currys deal you get the GoPro Hero7 Black PLUS a Travel Accessory kit which consists of:  a mini extension pole and tripod that can be propped on any level surface or used handheld; a sleeve and lanyard so you can wear your GoPro around your neck, on your wrist, or attached to your bag; and a grab-and-go case to keep everything in.

GoPro Hero7 Black and Travel Accessory Kit Bundle | £349.00 | Save £54.99
Get the best action camera in the GoPro range along with a travel accessory kit for £54.99 less than the price of buying everything separately. This is a hot summer deal and only valid whilst stock lasts, so hurry.View Deal

For more GoPro deals, including deals on the Silver and White versions of the camera, check out The best GoPro deals, and the live GoPro Hero7 Black prices shown below.