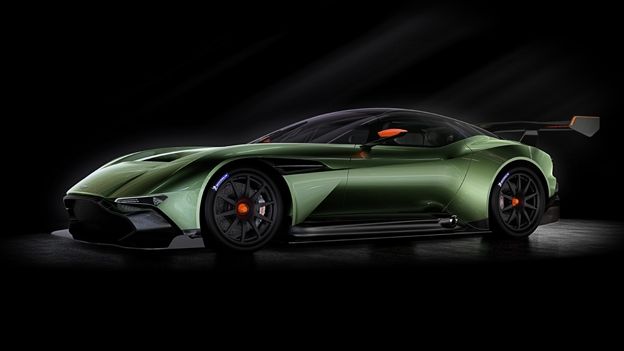 The Vulcan is the most powerful car Aston Martin has ever built. That should be saying something, but it doesn't even begin to explain just how monstrous this is...

Inspired by Aston's successful motorsport division, the Vulcan is a race-tuned carbon-fibre behemoth. Despite being installed with a full FIA rollcage, it still has a power to weight ratio that"exceeds those of the GTE cars which compete in the FIA's World Endurance Championship".

So essentially, what we're looking at is a carbon-fibre shell, an 800bhp engine, and a rollcage so you don't die.

Aston Martin is only making 24 of these boxcar derby death-traps so you'll have to fork out a whopping£1.8 million for the pleasure of riding in one. Not only that, the Vulcan is so powerful you can't even drive it on the road - you'll have to keep it near a race track.

If you do decide to plonk some money down on one, your wad of cash will not only pay for the car, but also for an in-depth track lesson fromAston Martin Racing's Le Mans-winning Darren Turner, who will guide you through the art of racing in a number of high performance Astons including the V12 Vantage S, One-77 and the Vantage GT4 race car.

One thing is for sure, if Bond got behind the wheel of this after a slew of Martinis and a bottle of Bolly, there's definitely not going to be a sequel...