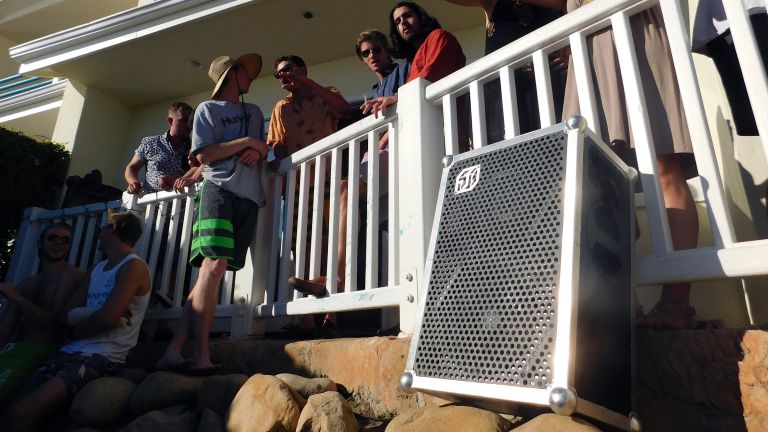 Pray silence, please, Crowd-fund Kangaroo Court is in session again. Each Friday, we look at one of the many tech startups mewling for dollars, and deciding whether or not it deserves your financial assistance. Last week's CKC - Goblin VR - was such a success, it immediately cancelled its crowd-funding campaign, so perhaps this week's should look out: It's Soundboks.

• Or maybe try these indoor ones, given the weather.

It's a big speaker.

Good eyes! But not only is this big, it is also Bluetooth connected and very loud indeed. It's basically Mötörhead's PA system, but with Bluetooth - there's also a line in. It's the brainchild of the group of Danish lads -Jesper, Hjalte and Christoffer -in this painfully awkward promotional photo where it looks like they're all trying to pick each other up. Just feel that sexual tension!

It'll reach 119dB, which is the same as a pneumatic drill, or James Corden on heat. Doctors warn us thatvolumes greater than 85 dB may cause hearing loss. Well, I say 'doctors'. I mean 'this website I just found'.

And why is that good?

Because then you can make party, ja?Jesper, Hjalte and Christoffer decided to go down this pathbecause 'they couldn't find a speaker for sale which could keep up with them on the festival scene,' whatever that means. They duly teamed up withUS startup fund Y-Combinator and Peter Lyngdorf, founder of Steinway-Lyngdorf, with engineering input from former JBL engineer Johnny Engberg.

The lads wanted to "deliver the kind of volume which can drown out the rest of the music festival, endure mud, rain and be thrown about whilst lasting longer than any reveller can."

I'm not quite sure what Coldplay or Adele or Deadmaus are going to say about that when they're trying to do their thing and a bunch of Danish people are drowning them out with top musical acts from Denmark such as, erm, errr… Well, top musical acts, anyway.

I think the idea is to use it away from the main stage.

Perhaps you're right. At least it'll drown out festival campsite bongo players, then.

But surely to get that kind of volume you need to plug it into a power socket?

Not so, my friend. The Soundboks in fact runs on two interchangeable, rechargeable batteries, giving up to 60 hours of mega raving and having it large, as pictured here.

In fact, a more specific battery life is given as, '2.5 days of high quality sound up to 113dB'. That's about the same volume as sandblasting.Doctors (okay, another website I found) say you shouldn't be exposed to that kind of decibel count for more than half an hour per day, and less if it's belting out Danish house music.

Why have you got such a downer on this?

I just immediately picture someone getting into the same train carriage as me with it. People who play music through their phone speaker in public are bad enough… This is like giving them nuclear weapons.

Lordy, no. What does this abomination cost?

'The ultimate speaker for outdoor parties, sports and any sort of festive get-together. Designed by industry-leading engineers and experienced party-goers!'

There goes the slightest chance of any sleep this summer.

A device that blurs the line between 'fun party person' and 'power-crazed sociopath'. We're looking forward to getting one in the office, though…