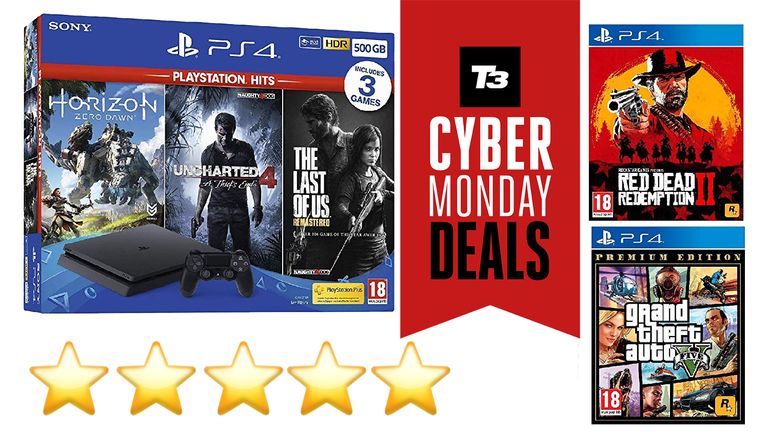 Black Friday delivered some great Sony PS4 deals, but none of them offered this much gaming value. That's because this Cyber Monday gaming deal from Amazon delivers a PS4 and FIVE amazing 5-star rated games for just £229.99.

That more than 230 hours of 5-star rated gaming awesomeness, along with the thin and quiet PS4 Slim, for one incredibly attractive price point.

And, be under no illusion, these are not filler games but a selection of this generation's absolute best titles. Horizon Zero Dawn is a post-apocalyptic open-world epic that plays a lot like Tomb Raider, if Tomb Raider inhabited a world full of robotic dinosaurs that is. It bagged a maximum 5-star score from every publication that matters.

Uncharted 4 and The Last of Us meanwhile are cinematic, story-telling masterpieces, stuffed with action and drama. Both scored 5 stars from every publication that matters.

As for Grand Theft Auto V, well, what can you say that hasn't already about the open-world crime-'em-up that hasn't already been said? It's a brilliant, content-stuffed sandbox that lets you do what you wanna do. And that will likely involve hijacking cars and running over old ladies. How many stars did it get? 5 out of 5 of course.

And, finally, this deal also delivers Rockstar's latest open-world epic Red Dead Redemption 2. This game bagged 5-stars from every publication that matters and, arguably, is the game of this generation.

The full details of this 5-star deal can be viewed below:

Like the idea of picking up a PS4 but would prefer to do it on its own without any games? Well, if so, then be sure to check out the best Cyber Monday prices on Sony's full range of consoles below: