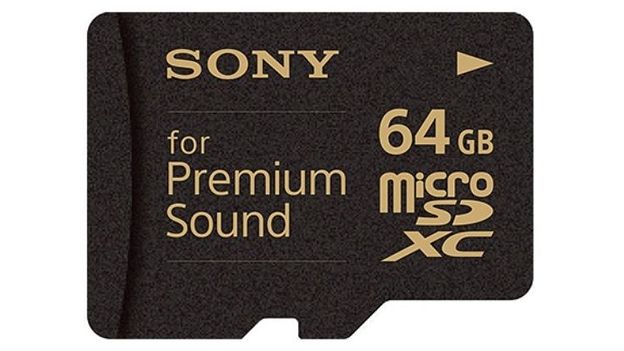 Yes, the headline is correct, Sony is going to sell a microSD memory card in Japan for £100. It has a capacity of 64GB.

For comparison, a Samsung card of the same capacity costs £22. Sony is charging a near-£75 premium for a card designed to appease audiophiles and that will suit its new lossless and high-resolution audio players.

While we're on-board with audio quality being as good as possible, we certainly can't advocate anyone spend this kind of money on a microSD card. Sony claims that it "produces less electrical noise when reading data". This is, without doubt, an utter nonsense. Even if microSD cards were especially "noisy" it would make no difference to the digital sound that eventually gets decoded by whatever device you're listening on.

This is the same snake oil that we're fed with premium HDMI cables and, in some extreme cases, power cables too. There is simply no justification for spending extra money on digital cables when the signal will either be received, or it will not.

Sony hasn't even tried to claim this is about transfer speeds, which might be a slightly more understandable approach to take, as lossless and high-resolution audio naturally has larger file sizes than MP3s, and so needs faster data transfer speeds to read the data. The fact is though, this is just a simple class-10 card, which is nothing special at all.

It is perhaps telling that Sony said of the card "we aren't that sure about the product's potential demand". That's a nicer way of saying, "we're really trying it on here, but even we will be utterly baffled if anyone buys this absurd product".

At the moment the card is only on sale in Japan, but if Sony does decide that bringing it here is a good idea we'll be organising a trip to whichever shops stock it where we will, en masse, point and laugh at it.