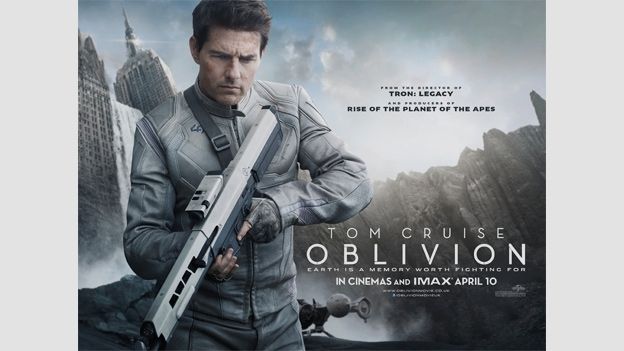 Director of TRON: Legacy and producer of Rise of the Planet of the Apes, Joseph Kosinski, has delivered a cinematic treat once again with this dystopian view of the future.

Starring Tom Cruise, Oblivion is shot in stunning 4k resolution and will be showing in cinemas from April 10.

Our film buff friends over at Total Film have tied up with Oblivion studio Universal Pictures to offer an amazing once-in-a-lifetime competition prize of tickets to the Oblivion Premiere in Dublin, including private jet transport, five star hotel accommodation and even the chance to meet the stars themselves – click here for the full details!

Oblivion features Jack Harper (Cruise) as one of the last few drone repairmen stationed on Earth. Part of a massive operation to extract vital resources after decades of war with a terrifying threat Jack's mission is nearly complete. However, when he rescues a beautiful stranger (played by former Bond girl Olga Kurylenko) from a downed spacecraft a chain of events forces him to question everything he knows and abruptly puts the fate of humanity in his hands.

For more information on Oblivion, check out the film site at www.oblivionmovie.co.uk or on Facebook/oblivionmovieuk.