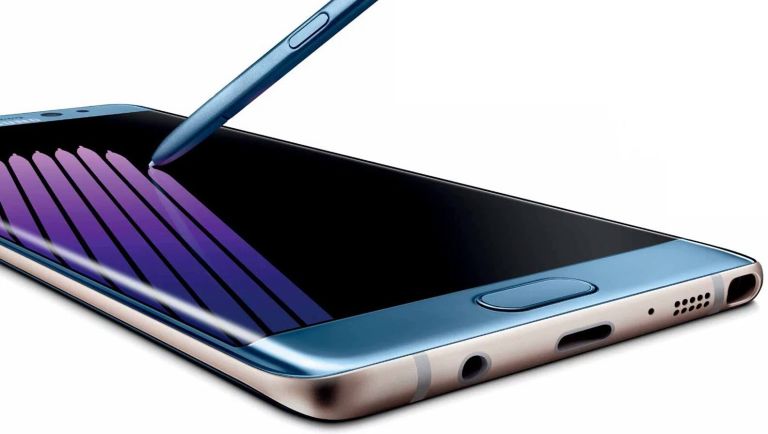 After taking a two-year break from the UK, Samsung's Galaxy Note range has returned to our shores. Meet the Samsung Note 7.

What about the Note 6 I hear you scream? Samsung skipped number 6 in order to bring the Note range in line with the flagship Galaxy S range.

Let's get down to the nitty-gritty specs - also check out our main feature: 10 killer features of Samsung's new super phablet

The Samsung Note 7 is dominated by a 5.7-inch Super AMOLED screen with beautifully taped edges borrowed from the S7 Edge. The display has a resolution of 2,560 x 1,440. That's a pixel density of 518 pixels per inch.

It packs the same Samsung-built Exynos 8890 octacore processor as the Galaxy S7, and has 4GB of RAM. That should mean it's a speed demon, just like its smaller sibling.

The Note 7 boasts 64GB of internal storage (which is expandable via MicroSD) and a massive 3,500mAh battery.

Also borrowed from the Galaxy S7 is the amazing 12MP camera. It really is the best on the market, so the Note 7 should be able to take some amazing pictures.

The S Pen is back with a vengeance, allowing users to doodle on the screen, and the body is now waterproofed (IP68).

Samsung is also keen to boast about the security credentials of the Note 7 - it now features an Iris Scanner, which allows you to unlock the smartphone with your eyeballs.

The Galaxy Note 7 will go on sale in the UK on 2nd September, with pre-orders starting from 16th August.

The Note 7 looks like it could be the perfect phablet, we just can't wait to get our hands on the device. Stay tuned to T3.com for more features and a review.