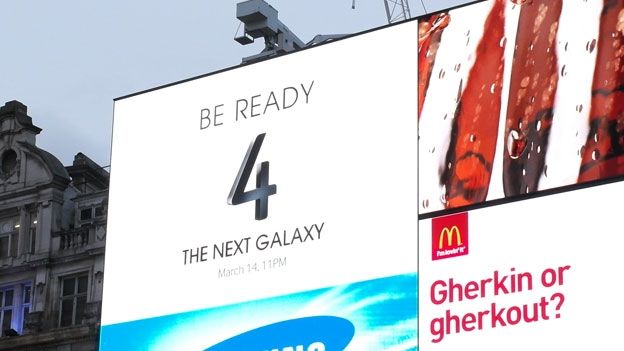 The Samsung Galaxy S4 will be launching in the UK this Saturday with the Android smartphone arriving on both contracts and SIM Free depending on your preference.

Taking on the iPhone 5 and the HTC One the flagship S4 boasts a fast 1.9GHz quad-core processor along with 2GB of RAM and a large 5-inch 1080p Full-HD screen.

If this sounds like your cup of tea then read on as many of the major UK networks have confirmed that they will be stocking the Galaxy S4 come release day on Saturday.

Check out our review of the Samsung Galaxy S4 here.

Virgin Media are the most recent to confirm pricing for the Galaxy S4 announcing that if you're a Virgin Media customer already you'll be able to get the S4 for £31 per month with an up-front cost of £99.

For those non-Virgin customers it's not all doom and gloom as the network is offering the Galaxy S4 for £41 per month and in return you'll be showered with 600 minutes, unlimited texts and 1GB of data all with a £99 upfront cost.

Next up is Talk Talk who caught the headlines last week after announcing that they will be offering the Samsung Galaxy S4 free on contracts as low as £30. They're also offering a nice bonus if you decide to opt for their Medium and Large plans by throwing in an extra 250mins.

EE will no doubt be looking to steal customers away from rivals with the promise of superfast mobile internet after it announced it would be selling the Samsung Galaxy S4 on 4G EE.

With contracts starting at £31 you'll be looking to shell out a fairly hefty £269.99 for the handset with only 500MB of data available. If you fancy something a little more substantial however EE also offer the S4 for £41 per month giving you 1GB of data and unlimited texts and minutes all for a £79.99 handset cost.

Of course with EE you'll also get all the benefits that come with their 4G service which includes a free movie to download every month, 2 for 1 cinema tickets every Wednesday and the ability to clone your phone to the cloud.

Three has confirmed it will be selling the Galaxy S4 as well, with the plucky UK network looking to undercut its rivals by offering the flagship Android-powered smartphone for free on a £35 per month contract giving you unlimited data, 500 minutes and 5,000 texts.

Still not convinced? Well Three also confirmed earlier this year that it would be upgrading all its existing compatible customers to 4G absolutely free with no upgrade costs involved.

Last but not least Vodafone have also announced their Galaxy S4 UK pricing offering the handset completely free on a £37 per month contract (provided you trade-in) whilst also throwing in unlimited minutes, unlimited texts and a mammoth 2GB of data.

The Samsung Galaxy S4 comes with a quad-core 1.9Ghz processor and 2GB of RAM making it one of the most powerful smartphones available alongside the Sony Xperia Z and the newly launched HTC One.

Storage comes in three forms: 16, 32 and 64GB whilst a micro SD card slot will let you expand that up to 64GB giving you a potentially huge 128GB of storage on an Android smartphone.

All of this is then viewed through the 5-inch 1080p Full HD display which has been squeezed into a body that is smaller than the Galaxy S3 despite the larger screen and considerable bump in specs.

On the back there's a 13MP camera capable of recording Full HD video and on the front there's a 720p 2MP camera for HD video calls. The S4 will also come running the latest version of Android Jelly Bean which means you'll get everything from Google Now to Photo Sphere along with the myriad of new features that Samsung have included themselves.

You can read the event as it happened on our live blog, or check out our video hands on below:

The Samsung Galaxy S3 made a case for the Android operating system like no phone before it. It picked up the T3 Gadget Award for Best Smartphone of the Year 2012 and regularly tops lists of the best smartphones available on the market.

We've scoured the web to bring you the latest news, rumours and speculations about the Samsung Galaxy S4

Samsung has confirmed it is working on flexible displays and rumours are already circulating that the Korean giant is planning to utilise this technology for the Galaxy S4.

Flexible displays are "foldable, rollable, wearable and more, [and] will allow for a high degree of durability through their use of a plastic substrate that is thinner, lighter and more flexible than conventional LCD technology," a Samsung spokesperson told the BBC.

The flexible OLED (Organic Light Emitting Diode) screen on the Galaxy S4 would also likely be Full HD with a resolution of 1,920 x 1,080 or higher and would be a full five inches across - which is encroaching on Samsung Galaxy Note II territory.

The Samsung Galaxy S4 could sport a larger 4.99-inch Full-HD display and come with a much smaller bezel after what is being claimed to be an official press shot of the Galaxy SIV was leaked.

The leaked image was sent to SamMobile and came with a range of specs which suggest that Samsung will be launching a phone to take on both the current generation of the iPhone and also Apple's upcoming iPhone 6.

We've not been short of Samsung Galaxy S4 spec rumours over the last couple of months.

There are suggestions the Samsung Galaxy S4 will have 802.11ac WiFi technology – or 5G WiFiconnections. This is supposed to provide browsing speeds roughly equatable with a wired connection.

Apparently, the Samsung Galaxy S4 will sport a Broadcom BCM4335 chip that incorporates the 802.11ac WiFi capacity along with Bluetooth 4.0 and an FM radio.

According to Korean website Ddaily, the Samsung Galaxy S4 will arrive toting a quad-core Exynos processor built on the 28nm microarchitecture standard. Essentially, this is a smaller, faster Exynos (Samsung's own custom processors) than is currently tucked away inside the Samsung Galaxy S3.

Newer processors, along with increased speed, focus on improving efficiency between cores. This should mean that the Samsung Galaxy S4 can boast more processes and a longer battery life than we've previously seen in a handheld.

Other specs include a 13MP rear-facing camera and, of course, the aforementioned 1080p screen.

In terms of browsing speed, a new rumour suggests the Samsung Galaxy S4 will arrive with 802.11ac WiFi - also known as 5G WiFi. This new WiFi technology is aimed at providing wireless speeds equatable with a standard wired connection.

According to androidgeeks, the Samsung Galaxy S4 will arrive with a Broadcom BCM4335 chip that features 802.11ac WiFi, Bluetooth 4.0 and an FM radio.

The Samsung Galaxy S4 may come armed with company's brand new Exynos Octa eight-core processor, if recent benchmarking tests are to be believed.

It might sound a bit of a stretch but bear with us – model numbers SHV-E300S and GT-I9500, which have previously been mentioned as identifiers for the Galaxy S4 in previous speculation, have shown up in screenshots taken from the AnTuTu benchmarking app.

The screenshots reveal a 1.8GHz processor, which is in line with the next-generation eight-core Exynos 5 Octa chip Samsung is known to be working on.

As well as more power and speed, it is also thought to offer longer-lasting battery life.

Some believe the phone will be more like the Galaxy Note 2 phablet, rather than the Galaxy S3.

Charles Golvin, a mobile devices expert with research firm Forrester told T3: “I don't expect the screen to exceed 5 inches and, while I can't offer specifics, I do expect a modified industrial design — more like the Galaxy Note 3 than the S3.”

Golvin says other aspects of the phone will be debated until the launch event in New York on March 14, but he expects better battery performance and further display and camera improvements. Front facing speakers were also drawn out as possible features.

“Samsung has been at the forefront in terms of specs, and I expect that will continue. It's not clear whether the S4 will carry Samsung's octo-core processor or a Qualcomm quad core, but I expect a combination of processor, 2 GB RAM minimum, and expanded battery to provide high performance with extended battery life.”

“The other areas of hardware development will be in the camera, both still and video, a 1080p HD display as well as audio, perhaps with front facing speakers.”

Ramon Llamas, the lead mobile researcher at IDC says the Galaxy S4 launch will 'surprise and delight', but that it won't be down to the hardware improvements, claiming the specs race is all-but-over.

He told T3: “I think Samsung will surprise and delight people come March 14.”

“It is already is popularising multi screen usage on your device. There are no other smartphones that are doing that. That gets your smartphone to be that much more like a computer. What's next?”

Llamas predicts Samsung will integrate new software features that will make better use of the camera sensor, beyond taking pictures, and expects S-Voice to improve exponentially in the latest generation device.

“There's a very select few companies that you don't underestimate. Apple is one, Samsung is clearly another,” he added.

“Take a look at the track record. They didn't announce the Galaxy S4 at CES – the so-called Super Bowl of Technology. They said “no” to MWC and said “we're going to have our own event.”

“You don't have your own event for the sake of it. You're doing it to have that time all to yourself and get everyone's attention.

“If they're going to continue with 'The Next Big Thing Is Here' campaign, that puts pressure on you to make sure you are actually delivering the next big thing. It can't be incremental updates and bigger screen size. It has to be more than that.”

As stated above, Samsung has more or less slated the date for the Samsung Galaxy S3's launch as March 14th.

Arumour reported to Sammobile from a "trusted insider" at Samsung pegs the Galaxy S4 release for March 15, 2013. Apparently, the handset will then go on sale in the second week of April, with Europe getting first dibs.