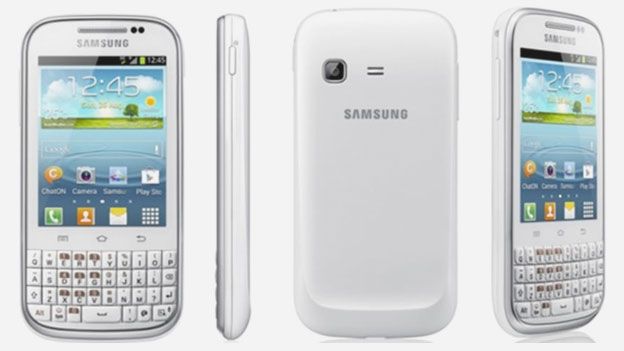 Lining up at a reasonable 11.7mm thick, the Samsung Galaxy Chat is to offer a selection of entry-level innards with a 2-megapixel rear-mounted camera landing next to a 3-inch QVGA display and Google's Android 4.0 Ice Cream Sandwich operating system.

With 4GB of internal storage able to be expanded up to 36GB though a microSD card, integrated Wi-Fi and Bluetooth capabilities handle the handset's connectivity options. A dedicated button also offers instant access to Samsung's BBM-esque ChatON messaging service.

Set to be rolled out across Europe later this month with further markets to follow, a confirmed Samsung Galaxy Chat UK price has yet to be confirmed. Despite this lack of forthcoming pricing, Samsung has suggested the handset will land with “a competitive price point.”

Are you impressed by the full QWERTY, messaging nature of the Samsung Galaxy Chat or happier with Sammy's latest touchscreen monsters? Let us know via the T3 Twitter and Facebook feeds.