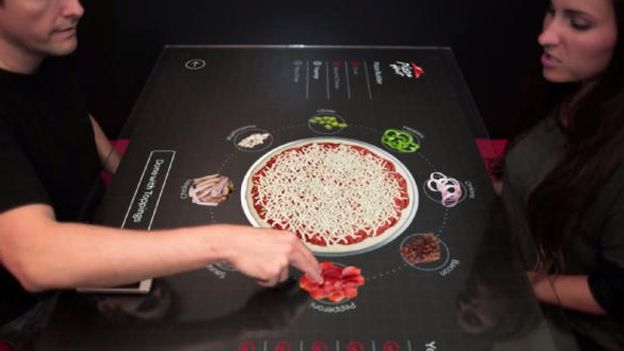 Pizza Hut has unveiled a concept of how you may order your pizza in the future.

The concept is a touch screen table that would give you the ability to order your pizzas with your fingers. It was created in partnership with Chaotic Moon Studios.

The video demonstrates how a touch-screen table could be used to choose every detail of your pizza, including how the toppings are distributed.

It also shows how customers could pay for the pizza using NFC technology in their smartphone or bank card.

The concept itself isn't particularly revolutionary. Microsoft first showed off a similar concept back in 2008.

However, this is the first time we've seen a major retailer release a concept that could make it to market.

That said, it is still unclear whether we will see it in Pizza Hut restaurants anytime. The money required to roll it out globally would be huge. It would also need to be very rugged to survive the abuse it would likely experience.