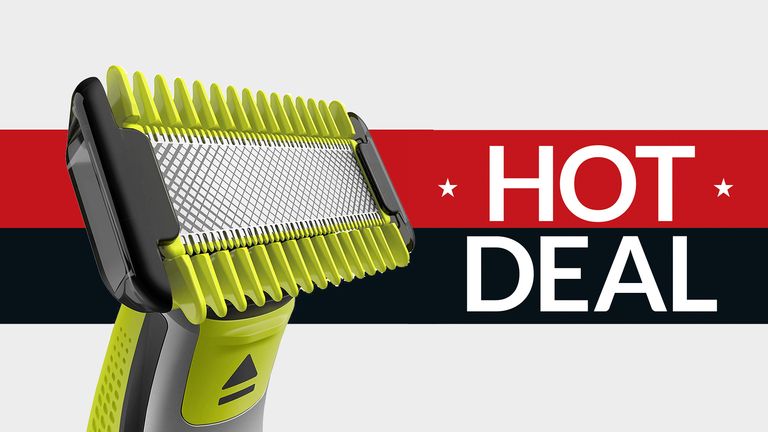 Philips OneBlade is on sale at Amazon in what it describes as a limited time offer and a Daily Deal in the sales. Given that this deal has now been running for weeks, who are we to trust Amazon's word on this? But still, it's not a bad deal.

Philips OneBlade has been a kind of below-the-radar, under-the-bikini-line sensation since its launch. It looks like a razor but is more like a beard trimmer, but then it's also more versatile than that. OneBlade products often sell out and become hard to find. We know – trying to find replacement OneBlades in London around Christmas was like shopping for this year's big toy, with stubbled men grappling in the aisles to claim the last few remaining, precious OneBlades.

Philips OneBlade Hybrid £39.99 | was £59.99 | Save £20 at Amazon
This comes with four different-length combs and 2 blades, and is designed for shaving both face and body. Would you be well advised to shave your face after doing your downstairs? We'll leave that with you. A third off RRP is not to be sniffed at, though.View Deal

Philips OneBlade Hybrid £33.32 | Was £49.99 | Save £16.67 at Amazon
Also down in price by a third this pack is almost exactly the same as the above, but with only three different length combs. As such it's supposedly just for your face but clearly, you can use it anywhere. With a spare blade thrown in as well and an even lower price than the above, this is probably a better bet for most men.View Deal

Philips OneBlade blades (3-pack) £24.99 at Amazon
These aren't on sale as such but £8.33 per blade is a decent enough price. As we mentioned, these do sometimes sell out completely for spells, so it's worth stocking up if you're a confirmed OneBlade nut.
View Deal

Why you should buy Philips OneBlade

The biggest innovation in men's grooming in years, Philips OneBlade uses a unique vibrating blade that looks rather dangerous but actually glides over skin, removing hair in a remarkably painless way. It shaves close but doesn't entirely remove hair, so its better for beard maintenance (with the combs) and perma-stubble rather than a completely smooth and egg-like appearance. The way it shaves does tend to scatter hair about but as it's waterproof you can use it in the shower, which alleviates that.

Each blade lasts a good few months. The comb attachments do also sometimes seem to wear out after about 6 months or so.