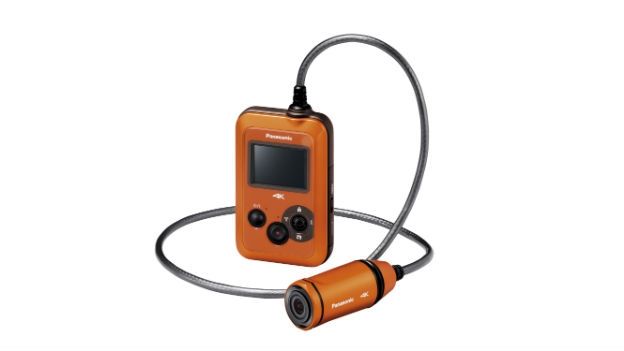 Panasonic has made a big deal about 4K during the first few months of 2014. The Japanese company showed us its new 4K-capable Lumix GH4 at CES and yesterday revealed its new 4K TV line-up.

Now the company is also attempting to muscle in on the action camera market, notably led by the GoPro series, with the new 4K-capable HX-A500.

Revealed at the company's exhibition in Amsterdam this week, the camera is a 31g lens attached via cable to a 119g body that features a 1.5-inch colour LCD screen. The device is dustproof and waterproof for up to 3 meters for 30 minutes. So, while you could capture some excellent snorkeling footage, we wouldn't recommend a SCUBA dive until proper third-party accessories become available.

It's also equipped with both NFC and Wi-Fi for connecting to a smartphone or tablet, and the accompanying Panasonic Image App lets you record and edit the video remotely, as well as uploading to social networks.

What Panasonic is really counting on is the 4K footage you'll be able to shoot. The result of a high-speed Crystal Engine Pro+ image processor, the HX-A500 shoots at 25fps, four times the resolution of standard 1080p HD. However, you'll need to invest in some microSD cards to store your footage.

Several features are inbuilt to make it easier to play the action back later, including Levelling Correction, Image Stabilisation and a new slow motion function.

Panasonic has also shown off some accessories, such as a head mount, that mean you can attach it to a helmet during mountain biking, skateboarding or skydiving.

"Whether footage is used to help improve a golf swing or remember a family day out cycling, the lightweight design and intuitive operation of HX-A500 ensures unique footage can be captured in stunning picture quality, with ease," said Hwa-Youl Kim, marketing manager for LUMIX and Camcorders at Panasonic.

However, having seen the HX-500 up close in Amsterdam, we're a little nonplussed by the form factor the company has chosen. Even though the base station is necessary for the 4K output, we feel the presence of two units, connected by a cord, could cause complications during certain sports.

Snorkeling being the obvious example where the main unit would likely have to be strapped to your arm with the cord winding around your back and up to the lens on your head.

What's more, price could be an important factor. The reason the GoPro series became popular was due to its affordability against the quality it brought to action photography.

Panasonic hasn't yet announced the pricing for the HX-500, but has said that we can expect to see it arrive in the UK in the next few months.