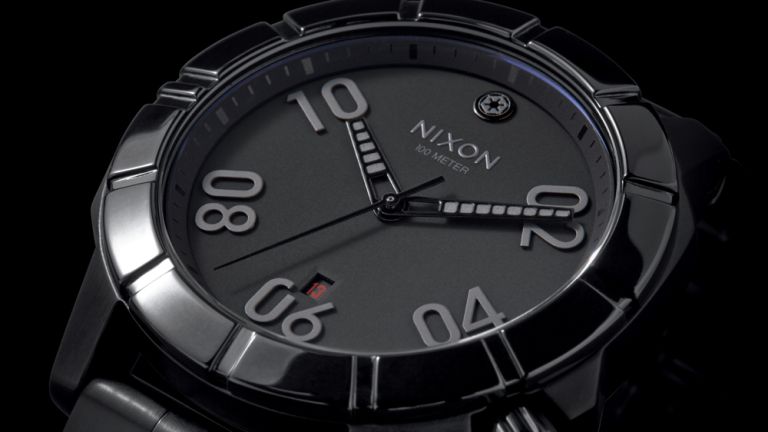 If you thought being a Star Wars fan meant ill-fitting clothes, greasy hair and tacky accessories, you'd only be partially correct. Now the watch company Nixon is getting rid of at least one of those stereotypes, by introducing a range of well-designed accessories for the more discerning Star Wars nerd.

Let's start with the watches, an area where Nixon has a lot of experience, the Star Wars Collection is being launched on September 18, initially with only the Dark Side range in tow.

The 51-30 (below, centre) comes in at £420, it features a 60 seconds sub-dial and Imperial logo, as well as custom caseback featuring the famous Stormtrooper quote, "Move Along". The second sub-dial features a blaster hand with kill (high tide) and stun (low tide).

The Ranger (below, left) comes in at £280, the hour and minute hands are inspired by an Imperial Pilot's helmet,features a red date complication, and a back inspired by the Ranger's 'Crash and Burn' way of life.

The Unit (above, right) is priced at £125, it's a custom polycarbonate case with Imperial inspired geometry. The red LCD display is taken from a TIE Fighter cockpit, displaying the time, temperature, and date.

There are two versions for each watch, a white 'Stormtrooper' model, and a black 'Imperial Pilot' model.

If your money can't stretch to the more premium models above, there are two 'Time Teller' variants, which only cost £65 and feature a 'blaster' second hand and Stormtrooper aesthetics.

If you're after something a bit more special, the Darth Vader 51-30 Automatic LTD is individually numbered, and comes in at over £2125. The Darth Vader watch, along with the Boba Fett watches will be available on November 19.

As well as watches, Nixon have also created a range of accessories, including bags, wallets and belts.

These are priced from £45 to £125. For the full range of products, check out Nixons website and get your order in now. May the force be with you.