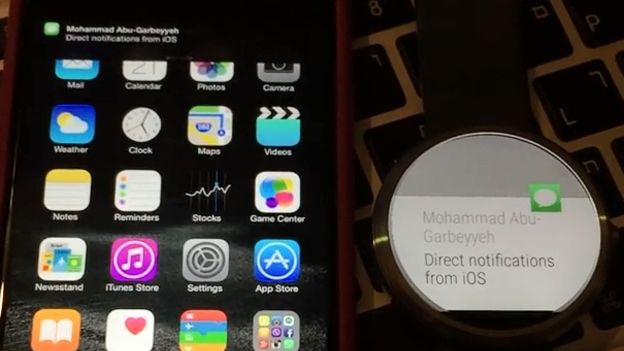 The Apple Watch is looming on the horizon, but that hasn't stopped one man from tweaking his Moto 360...

Mohammed Abu-Garbeyyeh is a developer, and he has just cracked the code. This isn't cryptology of Turing proportions, granted - actually, it probably isn't cryptology at all - but getting iOS notifications to display on Android Wear is still pretty impressive.

Not that it's something that both Google and Apple are against. Apple's decision not to make iOS compatible with Android Wear seems logical enough given its own smartwatch ambitions, but Google is far more open. Android Wear product manager Jeff Chang said recently that, "we always want as many users as possible to enjoy our experience."

Abu-Garbeyyeh hasn't revealed exactly how he got the hack to work, but we do know that it used the same ANCS (Apple Notification Centre Service) technology as Pebble's smartwatches, and that he didn't need to jailbreak iOS or root Android Wear to get it running.

If you're thinking of having a go yourself, or picking up an Android Wear watch on this basis, just hold on a second. This code will probably never be available, and if you manage to recreate it, you'll be locked out of Google Play and Google Now, natch. Still, it's cool to know what's possible.